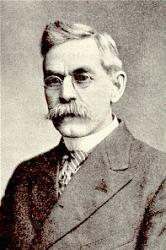 Frederick Augustus Fillmore, who was born on May 15, 1856, in Paris, IL, one of seven children, five sons and two daughters, born to Augustus Damon and Hannah Lockwood Fillmore. His father was a preacher in the Christian Church, as well as a composer,
songbook compiler, and hymn publisher who developed his own system of musical notation using numbers on the staff in place of note heads. Augustus eventually settled in Cincinnati, OH, and established a music publishing business there. Until 1906, there was no official distinction between "Christian Churches" and "Churches of Christ." The names were used pretty much interchangeably, and many older churches of Christ which are faithful today were once known as "Christian Churches."

Fred and his older brother James took over their father's publishing business following the death of Augustus in 1870 and established the Fillmore Brothers Music House. This became a successful Cincinnati music form, publishing church hymnals and later band and orchestral music. For many years the firm issued a monthly periodical, The Music Messenger. The brothers edited many hymnbooks and produced many songs which became popular. Beginning with the songbook Songs of Glory in 1874, there appeared many Fillmore publications which became widely used through churches, especially in the midwest. For these collections, Fred provided a great deal of hymn tunes.