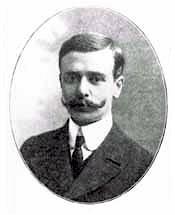 T. (Thomas) Tertius Noble (b. Bath, England, 1867; d. Rockport, MA, 1953) composed ORA LABORA for Borthwick's text when it was accepted in 1916 for inclusion in the Episcopal hymnal, on whose commission Noble served. ORA LABORA, which means "pray and work," was also published in The New Hymnal of 1918.

Sing this distinguished cathedral-style tune in unison. Use strong, majestic organ accompaniment and a moderate tempo. (The phrase "No time for rest" in st. 5 merits a thoughtful pause in our workaholic society!)

As a youth Noble attended a boarding school but found the curriculum so ill-suited to his abilities (the school offered no music) that he was allowed to come home. A pastor took the thirteen-year-old boy under his wing, supervised his education, and secured him a position at All Saints Church of Colchester. After attending the Royal College of Music in London, England, Noble became organist and choirmaster at Ely Cathedral (1892-1898) and York Minster (1898-1912). In 1913 he was invited to become the organist and to establish a cathedral music program at St. Thomas Episcopal Church in New York City. The church had been recently renovated, and a new organ was built under Noble's direction. He also established a famous choir school for boys there in 1919. Noble served that church until his retirement in 1942. He composed orchestral pieces, choral works, anthems, service music for the Anglican liturgy, and hymn tunes. A member of the Episcopal Church's Joint Commission on Church Music (1916-1943), he published two collections (1946, 1949) of free harmonizations of hymn tunes used in the Hymnal 1940.