To the Name of Our Salvation 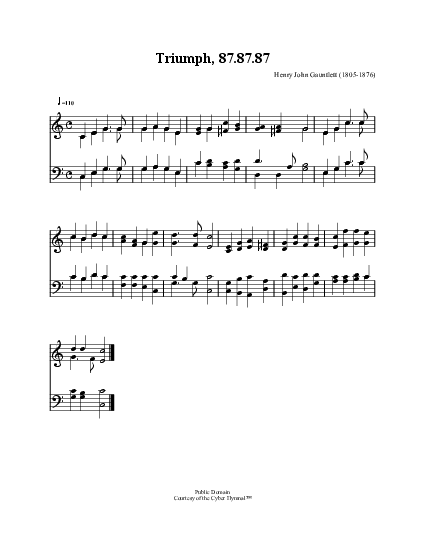 To the name that brings salvation

1 To the name of our salvation
laud and honour let us pay,
which for many a generation
hid in God's foreknowledge lay,
but with holy exultation
we may sing aloud to-day.

2 Jesus is the name we treasure,
name beyond what words can tell;
name of gladness, name of pleasure,
ear and heart delighting well;
name of sweetness passing measure,
saving us from sin and hell.

3 'Tis the name that whoso preacheth
speaks like music to the ear;
who in prayer this name beseecheth
sweetest comfort findeth near;
who its perfect wisdom reacheth
heavenly joy possesseth here.

4 Jesus is the name exalted
over every other name;
in this name, whene'er assaulted,
we can put our foes to shame:
strength to them who else had halted,
eyes to blind, and feet to lame.

5 Therefore we in love adoring
this most blessed name revere,
holy Jesu, thee imploring
so to write it in us here,
that hereafter heavenward soaring
we may sing with angels there.

Source: Ancient and Modern: hymns and songs for refreshing worship #819

Gloriosi Salvatoris. [Holy Name of Jesus.] This anonymous hymn, possibly of the 15th century, is given from the Meissen Breviary, cir. 1510, in Daniel, i. No. 449, in 6 stanzas of 3 double lines, and headed, "In festo S. Nominis Jesu." Dr. Neale's text, in 7 stanzas of 6 lines, is given in his Hymni Ecclesiae, 1851, p. 165, from the Liége Breviary. In his Mediaeval Hymns, 1851, he claims for his translation that it was the first rendering into English, and says concerning the original, “A German hymn on the Festival of the Holy Name of Jesus." All that can be said of its date is that it is clearly posterior to the Pange Lingua of St. Thomas, which it imitates." [Rev. W. A. Shoults, B.D.]
Translations in common use:—
1. To the Name that brings salvation. By J. M. Neale. Appeared in his Mediaeval Hymns, 1st edition 1851, p. 142, in 6 stanzas of 6 lines, and again in later editions. It is included, sometimes abbreviated, in the Scottish Episcopal Hymn Book, 1858; the Parish Hymn Book, 1863-75; the People's Hymnal 1867; the Hymnary, 1872, and others. In the American Hymns & Songs of Praise, New York, 1874, it is abridged to 4 stanzas, and begins, "Jesus is the Name we treasure." Another arrangement, beginning, "Name of Jesus, Name of pleasure," is in the Hymns for the Chapel of Harrow School, 1857.
2. To the Name of our salvation. This translation, which was given in Hymns Ancient & Modern, 1861, is based upon the above translation by Dr. Neale; but is so altered that only 10 lines of the 36 contained in the hymn remain unchanged. It was repeated in Kennedy, 1863; the Society for Promoting Christian Knowledge Appendix, 1869; the Irish Church Hymnal, 1873; and others. In the Sarum, 1868, the Hymns Ancient & Modern text is somewhat altered. The Hymnal Companion gives Dr. Neale's translation with variations from several hymn-books.
3. Name of our triumphant Saviour. By R. C. Singleton, written in 1867, and published in his Anglican Hymn Book, 1868.
4. To the Name that speaks salvation. By J. Ellerton, made for and first published in the S. P. C. K. Church Hymns, 1871.

All tunes published with 'To the Name of Our Salvation'^ top

The Irish Presbyterian Hymbook #244a

The Irish Presbyterian Hymbook #244b