There's a Song in the Air

There's a song in the air! There's a star in the sky!

1 There's a song in the air!
There's a star in the sky!
There's a mother's deep prayer
and a baby's low cry!
And the star rains its fire
while the beautiful sing,
for the manger of Bethlehem
cradles a King!


2 There's a tumult of joy
o'er the wonderful birth,
for the virgin's sweet boy
is the Lord of the earth.
Ay! the star rains its fire
while the beautiful sing,
for the manger of Bethlehem
cradles a King!


3 In the light of that star
lie the ages impearled;
and that song from afar
has swept over the world.
Every hearth is aflame,
and the beautiful sing
in the homes of the nations
that Jesus is King!


4 We rejoice in the light,
and we echo the song
that comes down through the night
from the heavenly throng.
Ay! we shout to the lovely
evangel they bring,
and we greet in his cradle
our Savior and King! 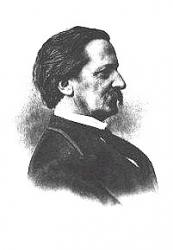 Holland, Josiah Gilbert, was born at Belchertown, Massachusetts, July 24, 1819. He was for some time on the staff of the Springfield Republican, and became in 1870 the editor of Scribner's Magazine. He has written several successful books, and some poetical pieces. One of the latter, "For summer's bloom, and autumn's blight" (Praise in and through all things), was included, from Bitter Sweet, 1858, in the Boston Unitarian Hymn [and Tune] Book for the Church & Home, 1868. He died Oct. 12, 1881. --John Julian, Dictionary of Hymnology (1907)… Go to person page >
^ top

All tunes published with 'There's a Song in the Air'^ top

“And suddenly there was with the angel a multitude of the heavenly host praising God and saying, 'Glory to God in the highest, and on earth peace among those with whom he is pleased!'” (Luke 2:13-14 ESV) This hymn describes the awesome spectacle this angelic concert must have been, and elaborates on its meaning – exultation over the arrival of the King of kings. In the final stanza, we join in that song as it echoes through our time, and we declare the good news of our Savior's birth.

Josiah G. Holland is the author of this text, which first appeared in W. T. Giffe's The Brilliant, a Sunday school songbook published in 1874. It did not appear in a hymnal until 1905, when it was published in the Methodist Hymnal.

Most hymnals include all four stanzas with little to no alteration. The first two stanzas are about the song of the angels that announced to the world the birth of the new King of kings. The second halves of both are nearly identical. The third stanza speaks to the far-reaching implications of this birth of the King. These three also mention the star (Matthew 2:1-12). The response of humankind is the theme of the final stanza, as “we greet in his cradle our Savior and King.”

The most common tune for this text, CHRISTMAS SONG, was written in 1904 by Karl P. Harrington, who was a music editor for the 1905 Methodist Hymnal, where the text was first published. Three musical settings were given for that text, of which CHRISTMAS SONG was the second. Harrington gave expressive tempo markings for this tune, indicating that the first half of the tune was to be sung Andante con moto, followed by a short ritardando, and the second half at piu mosso, with a longer ritardando to close the song.

This hymn is a Christmas carol. One effective way to use the hymn is to depict the “song in the air” by having the choir, or part of it, begin singing from an unusual, unseen location in or near the sanctuary. The congregation could join in halfway through the first stanza, or at the beginning of the second, or the choir could continue with a choral arrangement such as “There's a Song in the Air.” Another choral setting that uses two choirs (SATB and children's) would work well is “Silent Stars,” which combines Holland's text and Harrington's tune with an original text and tune by Joel Raney in a simple yet moving arrangement.

Hymns for a Pilgrim People #134

Hymns of the Christian Life #65