The apostle slept, a light shone in the prison

The apostle slept, a light shone in the prison 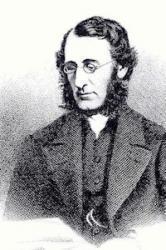 Burns, James Drummond, M.A., was born at Edinburgh, February 18, 1823. He studied and graduated M.A. at the University of Edinburgh. In 1845 he became Free Church minister of Dunblane, but resigned through failing health, in 1848, and took charge of the Presbyterian Church at Funchal, Madeira. In 1855 he became minister of Hampstead Presbyterian Church, London. Died at Mentone, Nov. 27, 1864, and was buried in Highgate Cemetery, London. His hymns appeared in:— (l) The Vision of Prophecy: and other Poems (Edin., Edmonston and Douglas). This was originally published in 1854, and enlarged in 1858. The Poems are distinguished by vivid colouring and poetic imagination, along with directness, delicacy of execution, pensive sweetness, and t… Go to person page >
^ top

The apostle slept, a light shone in the prison. [Burial of the Dead.] J. D. Burns. Appeared in his Vision of Prophecy,&c, 1858, as a paraphrase of the account contained in Acts xii. of the deliverance of St. Peter from prison. It was repeated in his Poems, 1865, p. 248, in 9 stanzas of 4 lines, and entitled "The death of a Believer." As a whole this hymn is not in common use, but the cento for the Burial of the Dead, "A voice is heard on earth of kinsfolk weeping," in the Hymnal Companion, 1876, is composed of st. vii.-ix.