People of the living God 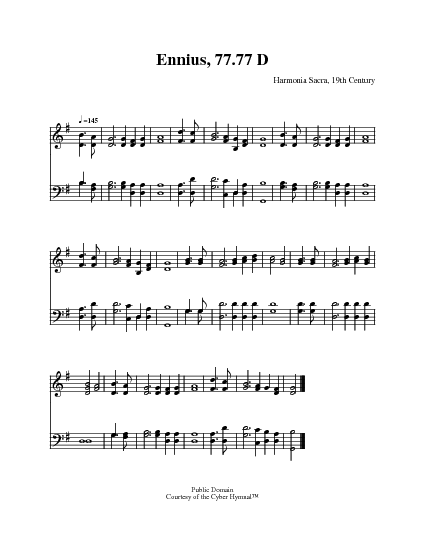 People of the living God, I have sought the world around

People of the living God,
I have sought the world around,
Paths of sin and sorrow trod,
Peace and comfort nowhere found.
Now to you my spirit turns,
Turns, a fugitive unbless'd;
Brethren, where your altar burns,
O receive me into rest!


Lonely I no longer roam,
Like the cloud, the wind, the wave;
Where you dwell shall be my home,
Where you die shall be my grave;
Mine the God whom you adore,
Your Redeemer shall be mine;
Earth can fill my heart no more,
Every idol I resign.


Tell me not of gain or loss,
Ease, enjoyment, pomp, and power,
Welcome poverty and cross,
Shame, reproach, affliction's hour:
"Follow me!"--I know the voice;
Jesus, Lord, Thy steps I see;
Now I take Thy yoke by choice,
Light Thy burden now to me.

People of the living God. J. Montgomery. [On Turning to God.] In Hatfield's Poets of the Church, N.Y., 1884, p. 440, the author says, “At the close of 1814, he[Montgomery] was publicly recognised, at Fulneck, as a brother in the Lord, and a member of the [Moravian] Society. It was in all probability on this occasion that he wrote his beautiful and popular hymn beginning with ‘People of the living God.'" This uncertainty in Hatfield's work becomes certainty in S. W. Duffield's English Hymns, N. Y., 1886, p. 455, where he says, "This hymn describes Montgomery's feelings at the prospect of being readmitted to the Moravian communion at Fulneck, November 4th, 1814." In Holland's Memoirs of Montgomery, published in 1854, the full details of Montgomery's application to the Moravian community at Fulneck, the consent of the authorities there, and his admission in Dec., 1814, are given, but neither there nor elsewhere in the Memoir is any reference made to this hymn. The original manuscript is not amongst the M. MSS., nor is there anything at our command which can fix the date of its appearance until 1819, when it was included in Cotterill’s Selections as No. 160, in 3 stanzas of 8 lines, and headed, “Choosing the portion of God's heritage." Although therefore we cannot say positively, with Duffield, that it was written at the period when Montgomery joined the Moravians at Fulneck, in Dec, 1814, yet we are prepared to admit with Hatfield that it was in all probability written at that time. The text was repeated from Cotterill’s Selections in Montgomery's Christian Psalmist, 1825, No. 466, and in his Original Hymns, 1853, No. 51. The use of this hymn is extensive.

All tunes published with 'People of the living God'^ top