O Lord, how happy should we be 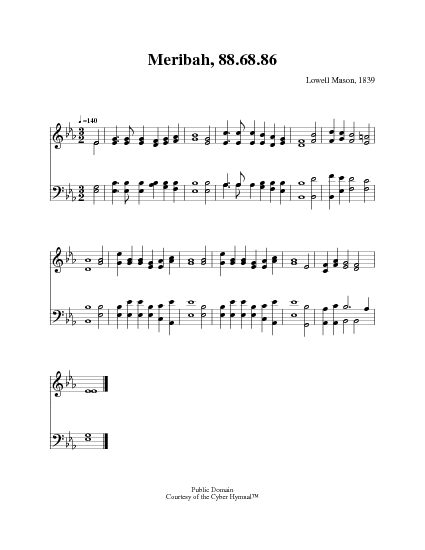 O Lord, how happy should we be

1 O Lord, how happy should we be
If we could cast our care on Thee,
If we from self could rest,
And feel at heart that One above,
In perfect wisdom, perfect love,
Is working for the best!


2 How far from this our daily life,
Ever disturbed by anxious strife,
By sudden, wild alarms!
O could, we but relinquish all
Our earthly props, and simply fall
On Thy almighty arms!


3 Could we but kneel and cast our load,
E'en while we pray, upon our God,
Then rise with lightened cheer,
Sure that the Father, who is nigh
To still the famished raven's cry,
Will hear in that we fear!


4 Lord, make these faithless hearts of ours
Such lesson learns from birds and flowers;
Make them from self to cease,
Leave all things to a Father's will,
And taste, before Him lying still,
E'en in affliction, peace.

Source: The Church Hymnal: containing hymns approved and set forth by the general conventions of 1892 and 1916; together with hymns for the use of guilds and brotherhoods, and for special occasions (Rev. ed) #345

Anstice, Joseph , M.A., son of William Anstice of Madeley, Shropshire, born 1808, and educated at Enmore, near Bridgwater, Westminster, and Ch. Church, Oxford, where he gained two English prizes and graduated as a double-first. Subsequently, at the ago of 22, he became Professor of Classical Literature at King's College, London; died at Torquay, Feb. 29, 1836, aged 28. His works include Richard Coeur de Lion, a prize poem, 1828; The Influence of the Roman Conquest upon Literature and the Arts in Rome (Oxford prize Essay); Selections from the Choice Poetry of the Greek Dramatic Writers, translated into English Verse, 1832, &c. His hymns were printed a few months after his death, as:— Hymns by the late Joseph Anstice, M.A., formerly Student… Go to person page >
^ top

O Lord, how happy should we be. J. Anstice. [Rest and Peace in Jesus.] First published in his posthumous Hymns, 1836, No. 44, in 5 stanzas of 6 lines. In 1841 it was included in the Child's Christian Year, and from thence has passed into numerous hymnbooks in all English-speaking countries. It was probably suggested by the words of the Psalmist, "Cast thy burden upon the Lord, and He shall sustain thee;" but in the Hymns there is nothing to indicate its origin, as it is printed there without title or heading of any kind. Usually the text is slightly altered, that in the Hymnal Companion, although claiming to be the original, being at fault in no less than four instances. This hymn is the best known and most widely used of Anstice's hymns.

All tunes published with 'O Lord, how happy should we be'^ top

The Book of Common Praise: being the hymn book of The Church of England in Canada (revised 1938) #536c

The Book of Common Praise: being the hymn book of The Church of England in Canada (revised 1938) #536b

Welsh and English Hymns and Anthems #47b