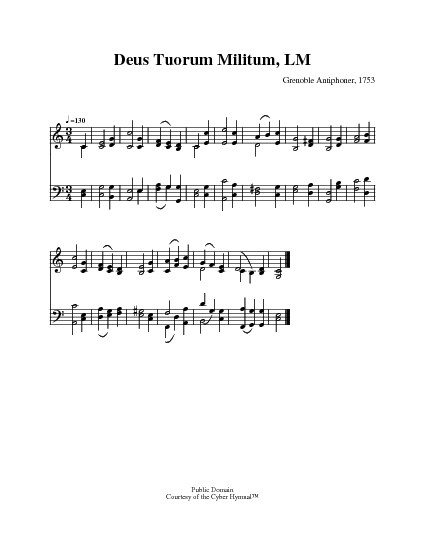 1. O God, Thy soldiers’ crown and guard,
And their exceeding great reward;
From all transgressions set us free,
Who sing Thy martyr’s victory.


2. The pleasures of the world he spurned,
From sin’s pernicious lures he turned;
He knew their joys imbued with gall,
And thus he reached Thy heavenly hall.


3. For Thee through many a woe he ran,
In many a fight he played the man;
For Thee his blood he dared to pour,
And thence hath joy forevermore.


4. We therefore pray Thee, full of love,
Regard us from Thy throne above;
On this Thy martyr’s triumph day,
Wash every stain of sin away.


5. O Christ, most loving King, to Thee,
With God the Father, glory be;
Like glory, as is ever meet,
To God the holy Paraclete.

Deus tuorum militum. [Feasts of Martyrs.] This anonymous Ambrosian hymn is in two forms, one in 32 lines and the second in 16 lines. It dates probably from the 6th century. The question as to what was the original form of the hymn has not been determined. Daniel's (i., No. 97) heading of the texts (both forms) is "De Communiunius Martyris," and he remarks that the hymns for the Common of Saints are nearly always of greater length in old and un¬altered Breviaries than in those which are of more recent date, or which have been revised. The older hymns having reference to some particular saint, certain stanzas are afterwards cut out to make the hymn suitable for general use. If this view be taken of the present hymn, then the longer form is the original, and the shorter form given in the Breviaries is an abbreviation therefrom. Against this conclusion there are two facts, the first that the lines in the fuller form, which are not given in the Breviaries, do not apply to any special martyr, and second, that the oldest form in which we now have the hymn is (omitting the doxology) in 16 lines. This form, with slight variations in the text, is in the Mozarabic Breviary. (Toledo, 1502, 317 b); in a 10th century manuscript at Munich, where it is adapted for the Nativity of St. Laurence, quoted by Mone, No. 740; and in the Latin Hymns of the Anglo-Saxon Church, Surtees Soc, 1851, from an 11th cent. ms. at Durham. This would suggest that the shorter form of the hymn is the older of the two. As the translations into English are generally from the Roman Breviary, it may be noted that this is the shorter form, with slight variations in lines 6, 7 and 11. This hymn is also found in four manuscripts of the 11th century, in the British Museum (Jul. A. vi. f. 66; Vesp. D. xii., f. 107; Harl. 2961, f. 248 b; Add. 30851, f. 153 b.). [Rev. W. A. Shoults, B.D.]

DEUS TUORUM MILITUM (sometimes called GRENOBLE) was published in France in the 1753 Grenoble Antiphoner as a setting for the text "Deus tuorum militum" (“The God of Your Soldiers”). One of the finest French diocesan tunes from the eighteenth century, it represents a departure in Roman Catholic h…

All tunes published with 'O God, thy soldiers' crown and guard'^ top

The New English Hymnal #218a

The New English Hymnal #218b