The Birth of Christ 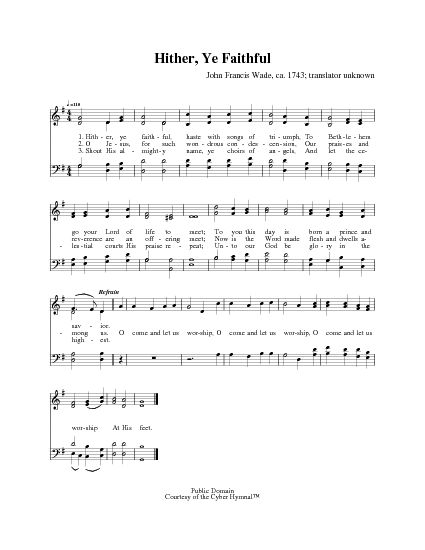 1 Hither, ye faithful, haste in songs of triumph,
To Bethlehem go, the Lord of life to meet;
To you this day is born a Prince and Saviour:
Oh, come, and let us worship at his feet!


2 O Jesus, for such wondrous condescension,
Our praise and reverence are an offering meet;
Now is the Word made flesh, and dwells among us;
Oh, come, and let us worship at his feet!


3 Shout his almighty name, ye choirs of angels:
Let the celestial courts his praise repeat;
Unto our God be glory in the highest;
Oh, come, and let us worship at his feet!

Source: The Voice of Praise: a collection of hymns for the use of the Methodist Church #153

John Francis Wade (b. England, c. 1711; d. Douay, France, 1786) is now generally recognized as both author and composer of the hymn "Adeste fideles," originally written in Latin in four stanzas. The earliest manuscript signed by Wade is dated about 1743. By the early nineteenth century, however, four additional stanzas had been added by other writers. A Roman Catholic, Wade apparently moved to France because of discrimination against Roman Catholics in eighteenth-century England—especially so after the Jacobite Rebellion of 1745. He taught music at an English college in Douay and hand copied and sold chant music for use in the chapels of wealthy families. Wade's copied manuscripts were published as Cantus Diversi pro Dominicis et Festis p… Go to person page >
^ top

Adeste fideles laeti triumphantes. [Christmas.] As to the authorship and actual date of this hymn nothing positive is known. It has been ascribed to St. Bonaventura, but is found in no edition of his Works. Most probably it is a hymn of the 17th or 18th century, and of French or German authorship. The text appears in three forms. The first is in 8 stanzas, the second, that in use in France, and the third the English use, both in Latin and English. The full text [is] from Thesaurus Animae Christianae, Mechlin, N.D. (where it is given as a second sequence for Christmas and said to be "Ex Graduali Cisterciensi"….

Translations in common use:—
16. Hither, ye faithful, haste with songs of triumph. In the American Presbyterian Psalms & Hymns Philadelphia, 1843, No. 174.

All tunes published with 'The Birth of Christ'^ top

A Choice Selection of Hymns and Spiritual Songs, Designed to Aid in the Devotions of Prayer, Conference, and Camp-Meetings #89

A Collection of Hymns and Spiritual Songs, Generally Used at Camp and Prayer Meetings #d80

A Collection of Hymns, for the use of the United Brethren in Christ #94

A Collection of Psalms, Hymns and Spiritual Songs; suited to the various kinds of Christian worship; and especially designed for and adapted to the Fraternity of the Brethren... #162

A Collection of Psalms, Hymns, and Spiritual Songs #657

A Selection of Hymns and Spiritual Songs, Designed for the Use of the Pious #d64

A Selection of Hymns for the Use of Social Religious Meetings and for Private Devotions. 7th ed. #307

A Selection of Hymns for the use of social religious meetings, and for private devotions 2d ed. #206

A Selection of Hymns, from Various Authors #d149

A Selection of Psalms and Hymns #A5

Cole's Pocket Edition of Psalm and Hymn Tunes, Containing Most of the Tunes Used in Different Churches #d51

Cottage Melodies; a hymn and tune book, for prayer and social meetings and the home circle #462

Hymnal of the Presbyterian Church #151

Hymns and Spiritual Songs for the use of Christians. 9th ed. #d76

Hymns and Spiritual Songs for the Use of Christians. 8th ed. #d73

Psalms and Hymns Adapted to Social, Private and Public Worship in the Presbyterian Church in the U.S.A. #d315

Select Melodies, comprising the Best of Those Hymns and Spiritual Songs in Common Use #d91

Select Melodies, Comprising the Best of Those Hymns and Spiritual Songs in Common Use not Found in the Standard Methodist Episcopal Hymnal #d91

Select Melodies; Comprising the Best Hymns and Spiritual Songs in Common Use, and not generally found in standard church hymn-books #172

Social and Campmeeting Songs For the Pious (4th ed.) #82

The Christian Melodist, a Collection of Popular Songs, for Use in Public and Social Meetings ... #d134

The Dover Selection of Spiritual Songs, with an Appendix of Choice Hymns #d95

The Hymn Book of the African Methodist Episcopal Church #765

The New Harmonia Sacra #230a

The Southern Harmony, and Musical Companion (New ed. thoroughly rev. and much enl.) #136

The Southern Harmony, and Musical Companion. New edition, thoroughly revised and much enlarged #136

The Virginia Selection of Psalms and Hymns and Spiritual Songs #230

Zion's Harp ... Sacred Songs Not Found in the Methodist Hymn Book and Many Never Before Published with Several Original Pieces #d114