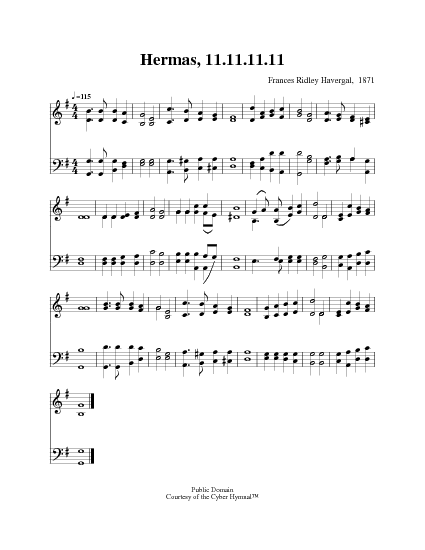 1 Golden harps are sounding,
Angel voices ring,
Pearly gates are opened,
Opened for the King:
Christ, the King of glory,
Jesus King of Love,
Is gone up in triumph
To His throne above.


Refrain:
All his work is ended,
Joyfully we sing:;
Jesus hath ascended:
Glory to our King!


2 He who came to save us,
He who bled and died,
Now is crowned with glory
At His Father's side.
Nevermore to suffer,
Never more to die,
Jesus, King of Glory,
Is gone up on high. (Refrain)


3 Praying for his children
In that blessed place,
Calling them to glory,
Sending them His grace;
His bright home preparing,
Faithful ones, for you;
Jesus ever liveth,
Ever loveth too. (Refrain)

Source: Worship and Service Hymnal: For Church, School, and Home #82 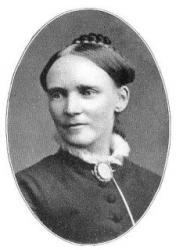 Havergal, Frances Ridley, daughter of the Rev. W. H. Havergal, was born at Astley, Worcestershire, Dec. 14, 1836. Five years later her father removed to the Rectory of St. Nicholas, Worcester. In August, 1850, she entered Mrs. Teed's school, whose influence over her was most beneficial. In the following year she says, "I committed my soul to the Saviour, and earth and heaven seemed brighter from that moment." A short sojourn in Germany followed, and on her return she was confirmed in Worcester Cathedral, July 17, 1853. In 1860 she left Worcester on her father resigning the Rectory of St. Nicholas, and resided at different periods in Leamington, and at Caswall Bay, Swansea, broken by visits to Switzerland, Scotland, and North Wales. She died… Go to person page >
^ top

"When visiting at Perry Barr, F. R. H. walked to the boys' schoolroom, and being very tired she leaned against the playground wall, while Mr. Snepp [editor of Songs of Grace & Glory, 1872] went in. Returning in ten minutes he found her scribbling on an old envelope. At his request she gave him the hymn just pencilled, ‘Golden harps,’ &c. Her popular tune Hermas was composed for this hymn. Hermas was the tune she sang, as “the pearly gates opened' for her, June 3, 1879." [HAV. MSS.]

The use of this "Ascension Hymn for Children," in Great Britain is limited, but in America it has attained to great popularity. It was published in the Day Spring Magazine, and the Day of Days, May, 1872; in Under the Surface, 1874, and in Life Mosaic, 1879.

All tunes published with 'Golden Harps are Sounding'^ top

Hymns of the Christian Life #109