God, the Father of Your People 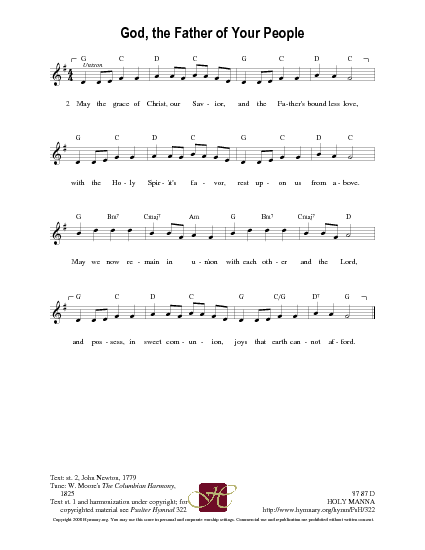 God, the Father of your people

John Newton (b. London, England, 1725; d. London, 1807) was born into a Christian home, but his godly mother died when he was seven, and he joined his father at sea when he was eleven. His licentious and tumul­tuous sailing life included a flogging for attempted desertion from the Royal Navy and captivity by a slave trader in West Africa. After his escape he himself became the captain of a slave ship. Several factors contributed to Newton's conversion: a near-drowning in 1748, the piety of his friend Mary Catlett, (whom he married in 1750), and his reading of Thomas à Kempis' Imitation of Christ. In 1754 he gave up the slave trade and, in association with William Wilberforce, eventually became an ardent abolitionist. After becoming a tide… Go to person page >

This hymn is unusual because two different and very short hymn texts, written two centuries apart, were combined to form a composite text. Both contain the themes of parting, peace, and unity. Stanza 1 is a prayer that God's people may be one body as they serve and witness. Stanza 2 is borrowed in part from 2 Corinthians 13: 14; it invokes a blessing on all God's people.

Alfred E. Mulder (b. Ireton, IA, 1936) wrote stanza 1 in 1978, during his days as a minister among the Navajo and Zuni people, as a versification of the ministry statement of Bethany Christian Reformed Church, Gallup, New Mexico. Mulder received his education at Calvin College and Seminary, Grand Rapids, Michigan, and studied counseling at the University of New Mexico in Albuquerque. Ordained a pastor in the Christian Reformed Church, he served congregations in Luctor, Kansas (1960-1964), and Brigham City, Utah (1964-1968), and was a missionary pastor in Gallup, New Mexico (1968-1984). Since 1984 he has held the position of director of new church development for Christian Reformed Home Missions.

John Newton (PHH 462) wrote the text of stanza 2. It was one of his "short hymns," first published in Olney Hymns (1779) in a section entitled "After Sermon."

Liturgical Use:
Just prior to a spoken benediction; at the close of worship (the spoken benediction should be some blessing other than the familiar apostolic form; instead use the Aaronic blessing from Numbers 6:24-26); an appropriate blessing on a marriage, with the following changes: "us" to "them," "we" to "they," and in the last line of stanza 1-"as one body we will serve you" to "as one body let them serve you" (or the bridal couple could sing stanza 1, and the congregation, stanza 2).

All tunes published with 'God, the Father of Your People'^ top