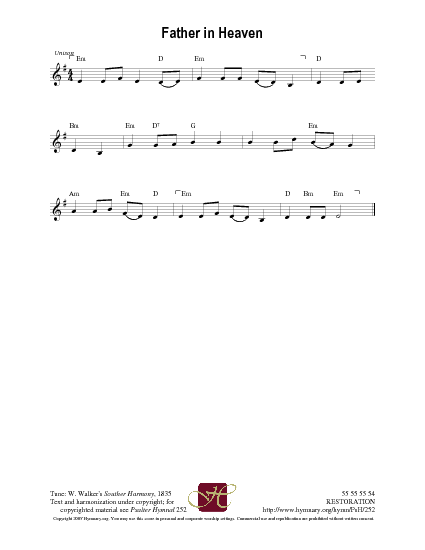 Father in heaven, Grant to your children

Featuring a trinitarian structure, this hymn is a prayer for God's presence in both worship and life. It was written in 1961 by Elena G. Maquiso (b. Guindulman, Bohol, Philippines, 1914). She was educated both in the Philippines and the United States, received a doctorate from the Hartford Theological Foundation in 1960, and taught at Silliman University in Mumaguete, Philippines, [sic: Dumaguete City, Negros Oriental (Philippines)] where she directed its Ulahingan Research Project. Her publications, related to indigenous folklore and hymnody, include Awitan Ta Ang Dyos (1962), Mga Sugilanon Sa Negros (1980), and Ulahingan: Epic of the Southern Philippines (1992).

Daniel Thambyrajah Niles (b. Telipallai, Ceylon, 1908; d. Vellore Christian Medical College, India, 1970) translated this hymn text for the EACC Hymnal. (1964), which he produced almost single-handedly. That hymnal includes forty-four of his own hymns and translations and adaptations of others. Niles began studies in law at Ceylon Christian University, but changed his course of study to the ministry, due in part to a devout Hindu warden at the University who greatly influenced him. Niles was ordained in the United Methodist Church in 1932. After serving in Ceylon, he became the president of the East Asia Christian Conference (EACC), and later the evangelism secretary for the World Council of Churches in Geneva.

A few word changes are included in the text published in the Psalter Hymnal; some other modern hymnals have changed the first line to "O God in heaven."

Liturgical Use:
Beginning of worship; before the proclamation of the Word; with spoken prayers following the sermon; as a short sung prayer; Lord's Supper.

ARISE is an anonymous American folk melody. Set to "Mercy, O Thou Son of David," the tune was published in William Walker's (PHH 44) Southern Harmony (1835) with the title RESTORATION. Its name was changed to ARISE (after the refrain in the ballad about the prodigal son) when it was set to Hart's te…

All tunes published with 'Father in Heaven'^ top