Creator of the Stars of Night 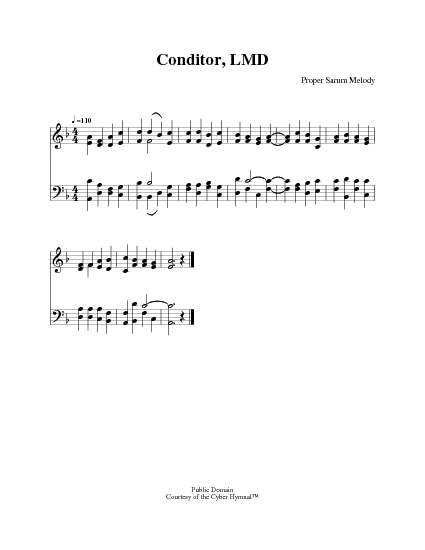 Creator of the stars of night

1 Creator of the stars of night,
your people’s everlasting light,
O Christ, Redeemer of us all,
we pray you, hear us when we call.


2 In sorrow that the ancient curse
should doom to death a universe,
you came to save a ruined race
with healing gifts of heav'nly grace.


3 When earth drew on to darkest night,
you came, but not in splendor bright,
not as a king, but the child
of Mary, virgin mother mild.


4 At your great name, majestic now,
all knees must bend, all hearts must bow;
all things on earth with one accord
join those in heav’n to call you Lord.


5 To God the Father, God the Son,
and God the Spirit, Three in One,
praise, honor, might, and glory be
from age to age eternally.

Conditor [Creator] alme siderum. [Advent.] This hymn is sometimes ascribed to St. Ambrose, but on insufficient evidence. It was rejected as such by the Benedictine editors; and with this the best authorities agree. It is known in various forms…
Translation in common use:— i. The Sarum Breviary Text: Conditor alme siderum.
1. Creator of the stars of night, by J. M. Neale, in the first edition of the Hymnal Noted, 1852, No. 10, in 6 stanzas of 4 lines. This is repeated without alteration in later editions of the Hymnal Noted; in Skinner's Daily Hymnal, 1864; in the Hymner, 1882, and others. It is also given as "Creator of the starry height, Thy people's," &c, in Hymns Ancient & Modern, 1861 (the alterations being by the compilers, who had printed another arrangement of the text in their trial copy of 1859), and Allon's Supplemental Hymns, 1868, &c. In Mercer, Oxford ed., 1864, it is rewritten by Mercer. Another rendering, slightly altered, from the Hymnal Noted is, "Creator of the starry height, Of faithful hearts," &c, in the Hymnary, 1872.

All tunes published with 'Creator of the Stars of Night'^ top

A New Hymnal for Colleges and Schools #216

Ancient and Modern #33a

Ancient and Modern #33b

Hymnal for the Hours #4

The Book of Common Praise of the Reformed Episcopal Church #18

The New English Hymnal #1a

The New English Hymnal #1b