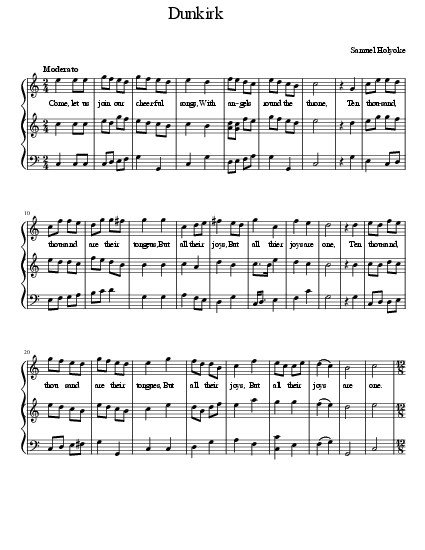 1 Come, let us join our cheerful songs
with angels round the throne;
ten thousand thousand are their tongues,
but all their joys are one.

3 Jesus is worthy to receive
honour and power divine;
and blessings, more than we can give,
be, Lord, for ever thine.

4 Let all that dwell above the sky,
and air, and earth, and seas,
conspire to lift thy glories high,
and speak thine endless praise.

5 The whole creation joins in one
to bless the sacred name
of him that sits upon the throne,
and to adore the Lamb.

Source: Ancient and Modern: hymns and songs for refreshing worship #362

Come, let us join our cheerful songs. I. Watts. [Praise.] This is one of the most widely known and highly esteemed of Watts's compositions. It has no special history beyond the fact that it appeared in his Hymns & Sacred Songs, 1707, and the enlarged edition, 1709, Bk. i., No. 62, in 5 stanzas of 4 lines, and was headed “Christ Jesus the Lamb of God, worshipped by all the Creation, Rev. v. 11-13." The most popular form of the hymn is in 4 stanzas, the stanza "Let all that dwell above the sky (iv.) being omitted. This text was adopted by Whitefield, 1753: Madan, 1760; De Courcy, 1775; Toplady, 1776, and many others amongst the older compilers, and is retained by far the greater number of modern editors, both in Great Britain and America. The hymn, in whole, or in part, has been rendered into many languages, including one in Latin, "Venite, Sancti, nostra laeta carmina," in Bingham's Hymnologia Christiana Latina, 1871.

Lowell Mason (PHH 96) adapted AZMON from a melody composed by Carl G. Gläser in 1828. Mason published a duple-meter version in his Modern Psalmist (1839) but changed it to triple meter in his later publications. Mason used (often obscure) biblical names for his tune titles; Azmon, a city south of C…

Henry Lahee (b. Chelsea, London, England, 1826; d. Croydon, London, 1912) composed NATIVITY, which was first published in 1855 and set to a nativity hymn (thus the tune's title), "High let us swell our tuneful notes," by Philip Doddridge (PsH 335). Because NATIVITY was published with Isaac Watts' (P…

Composed by Johann Crüger (PHH 42) as a setting for Paul Gerhardt's "Nun danket all’ und bringet Ehr," GRÄFENBERG was first published in the 1647 edition of Crüger's Praxis Pietatis Melica. The tune is arbitrarily named after a water-cure spa in Silesia, Austria, which became famous in the 1820…

Harmonia Americana: containing a concise introduction to the grounds of music; with a variety of airs, suitable fore divine worship and the use of musical societies; consisting of three and four parts #102b

A Selection of Plain Tunes, Set Pieces, and Anthems from Indian Melodies #21

Great Songs of the Church (Revised) #5

The Book of Hymns (A fresh anthology of favourite hymns) #35

The Song Book of the Salvation Army #57