Audio files: MIDI
Representative text cannot be shown for this hymn due to copyright.

Ewald J. Bash (Indiana, 1924-- ). A poet and also an occasional writer of folk melodies, his personal interests arose in the era of return to genuine folk music of the early Sixties and continued into the Seventies during the time of turmoil and crisis. His lyrics, set to a Latvian folk song, "Hymn for Those in Captivity," appears in Cantate Domine. He also composed hymns which have appeared in the hymnals of a number of communions. He was part of a folk liturgical movement in the Lutheran Church and contributed much to a development of such moods in an early work, Songs for Today. Certain of his work has also appeared in Jerusalem/Babylon: Handbook for a Christian in the Urban World. --Ewald J. Bash, DNAH Archives In a letter from Ba… Go to person page > 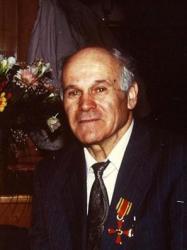 Evangelical German pastor, writer, translator (largely of religious songs), ecumenical activist, and one of the most influential and prolific hymnal compilers in Esperanto. He was a member of the editorial committee responsible for the 1971 Protestant hymnal Adoru Kantante, the sole compiler of the ten-installment Tero kaj Ĉielo Kantu (later republished in three volumes), and one of the three members of "Kloster Kirchberg", the editorial board that produced the 2001 ecumenical Esperanto hymnal Adoru - Ekumena Diserva Libro. Burkhardt was honored in a 368-page Festschrift, Esperante kaj Ekumene, Fest-libro por la 75a naskiĝ-tago de Adolf Burkhardt. With the other members of Kloster Kirchberg, he shared in the 2002 FAME-foundation's… Go to person page >
^ top

CAPTIVITY is a traditional Latvian folk tune; it is also known as KAS DZIEDAJA from the Latvian poem associated with the tune. The title CAPTIVITY is derived from its more recent use (especially in post-Vatican II Roman Catholicism) with Ewald Bash's paraphrase of Psalm 137, which begins "By the Bab…