By the Sea of Crystal

By the sea of crystal

Printable scores: PDFAudio files: MIDI, Recording
Representative text cannot be shown for this hymn due to copyright.
To see the text, purchase a flexscore. 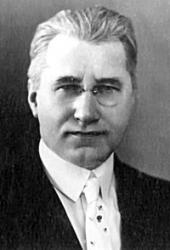 Once, after hearing Edward Elgar's "Pomp and Circumstance" march, William Kuipers (PHH 87) decided to write a new hymn text that could be sung to it. At the time the march was associated with the patriotic hymn "Land of Hope and Glory." Kuipers wrote this text late in 1932 while he was pastor of the Summer Street Christian Reformed Church (CRC), Passaic, New Jersey. He submitted it to Henry J. Kuiper, editor of the Christian Reformed Church weekly, The Banner, and a member of the committee preparing the 1934 Psalter Hymnal, which was the first denominational collection including hymns (the CRC had previously sung only psalms in worship).

Because Elgar's music was under copyright, The Banner held a contest to find a new tune for Kuipers's text. The magazine received 150 tune entries and recognized first, second, and third places, as well as six honorable mentions. First prize of $10 was awarded to Siebolt H. Frieswyk of Whitinsville, Massachusetts, and his tune was published with Kuipers's text in The Banner, May 5, 1933. However, an honorable-mention winner by John Vanderhoven was chosen as the setting for this text when the new Psalter Hymnal was printed in 1934. That association of text and tune has been continued in each of the following editions of the Psalter Hymnal. Because it was used as a theme Song for the Back to God Hour broadcasts, this hymn became well known to a whole generation of radio listeners in the 1950s and 60s.

The text's theme is drawn from John's vision of the saints in glory singing one of their great doxologies (Rev. 7:9-17). The initial reference to the "sea of crystal" is from Revelation 4:6–"Also before the throne there was what looked like a sea of glass, clear as crystal." And the final (rhetorical) reference to the "King of kings" (st. 3) comes from Revelation 17:14.

Liturgical Use:
Worship that focuses on the praise of God in glory; funerals; stanza 3 as a doxology.

John (born Johann Ludwig) Vanderhoven (b. Rotterdam, the Netherlands, 1887; d. Grand Rapids, MI, 1974) immigrated to the United States in 1912 and worked at various vocations. He concluded his career as owner of the Sterling Sponge and Chamois Company in Grand Rapids, Michigan (1951-1962). Vanderhov…

All tunes published with 'By the Sea of Crystal'^ top