Behold my Servant! see him rise 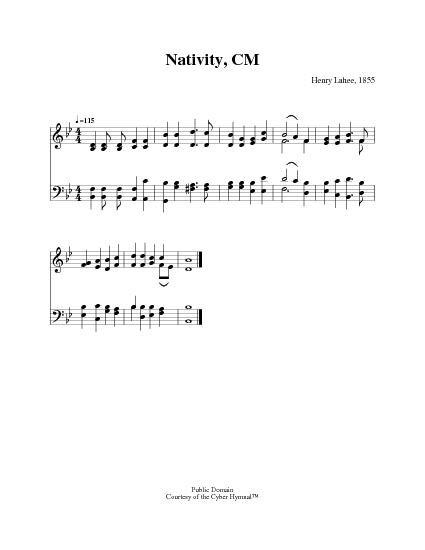 Behold my Servant! see him rise

1 Behold my Servant! see him rise
exalted in my might!
Him have I chosen, and in him
I place supreme delight.
2 On him, in rich effusion pour'd,
my Spirit shall descend;
my truths and judgments he shall show
to earth’s remotest end.


3 Gentle and still shall be his voice,
no threats from him proceed;
the smoking flax he shall not quench,
nor break the bruised reed.
4 The feeble spark to flames he’ll raise;
the weak will not despise;
judgment he shall bring forth to truth,
and make the fallen rise.


5 The progress of his zeal and pow’r
shall never know decline,
till foreign lands and distant isles
receive the law divine.

Behold my Servant! see Him rise. [Christ the Ambassador.] This Paraphrase, the author of which is unknown, first appeared in the Draft Scottish Translations and Paraphrases, in 1745, as No. v., on Is. xlii. 1-13, in 13 stanzas of 4 lines. The opening stanzas are: —

1. "Behold my Servant! see him rise
exalted in my Might:
Him have I chosen, and in him
I place supreme Delight."
2. "In rich Effusion, on his Soul,
my Spirit's Powers shall flow:
He'll to the Gentiles, and the Isles,
my Truths and Judgments show.”

The paraphrase extended in this strain to 13 stanzas, some of which are exceedingly good, but the whole is too extensive to quote.
ii. In 1781 John Logan published a volume of Poems, p. 108, No. 6, in which were several hymns and paraphrases, including one based upon the above, in 16 stanzas, and opening thus:—

"Behold! the Ambassador divine,
Descending from above,
To publish to mankind the law
Of everlasting love!
“On Him in rich effusion pour'd
The heavenly dew descends;
And truth divine He shall reveal
To earth's remotest ends."

We have given reasons elsewhere for holding that this rewritten version of the 1745
paraphrase is the work of M. Bruce (q. v.). The full text is in Dr. Grosart's Works of Michael Bruce, 1865, pp. 140-144.
iii. During the same year that Logan published his Poems, i.e. 1781, the new and revised edition of the Scottish Translations and Paraphrases was also published. Of this edition J. Logan was one of the revising and editing committee. In this work this hymn is included in a third form, in which we have 15 stanzas of 4 lines. Of these 60 lines, 22 full lines and 7, partly so, are from the 1745 Translations and Paraphrases; 16 full lines, and 5 partly so, from Bruce of 1781, the rest being new. The hymn thus presents one of the most peculiar pieces of patchwork with which we are acquainted….
iv. William Cameron (q. v.), a member of the Committee with Logan, in his list of authors and revisers of the 1781 Translations and Paraphrase, a copy of which has been preserved, gives to Logan the credit of compiling this cento. It has been in authorized use in the Church of Scotland for 100 years, but is rarely found elsewhere. It must be designated, "Scottish Translations & Paraphrases, 1745: M. Bruce, 1764, printed in J. Logan's Poems, 1781: J. Logan, 1781."
v. A cento, partly from the Translations and Paraphrases text was given in Bickersteth's Christian Psalmody in 1833, No. 238, and Miss Leeson's Paraphrases and Hymns, 1853, No. 50, Pt. ii., beginning, "Sing to the Lord, in joyful strains," but has now gone almost altogether out of use. Another arrangement direct from the above 1781 text, stanzas xii.-xv., "Sing to the Lord,” &c, was given in Kemble's Psalms & Hymns, 1853, and has been repeated in several collections.
vi. Another arrangement is: "Behold my servant, saith the Lord." It is composed of stanzas i.-iv, with alterations by Miss J. E. Leeson, and was included in her Paraphrases and Hymns, 1853, No. 50, Pt. i. Its use is limited.
vii. In American hymnals, in addition to a reprint of most of the foregoing arrangements, we have, “Thus saith the Lord, who built the heavens” in Belknap's Sacred Poetry; or, Psalms & Hymns, 1795, "O city of the Lord, begin." in the Presbyterian Church Psalmist, &c, N. Y., 1847, and others.

Henry Lahee (b. Chelsea, London, England, 1826; d. Croydon, London, 1912) composed NATIVITY, which was first published in 1855 and set to a nativity hymn (thus the tune's title), "High let us swell our tuneful notes," by Philip Doddridge (PsH 335). Because NATIVITY was published with Isaac Watts' (P…

All tunes published with 'Behold my Servant! see him rise'^ top