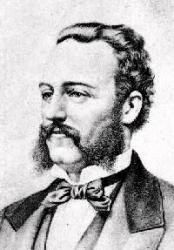 1840 - 1908 Person Name: Ira D. Sankey Hymnal Title: The Bright Array Composer of "[O land of the blessed]" in The Bright Array Sankey, Ira David, was born in Edinburgh, Pennsylvania, in 1840, of Methodist parents. About 1856 he removed with his parents to New Castle, Pennsylvania, where he became a member of the Methodist Episcopal Church. Four years afterwards he became the Superintendent of a large Sunday School in which he commenced his career of singing sacred songs and solos. Mr. Moody met with him and heard him sing at the International Convention of the Young Men's Christian Association, at Indianapolis, and through Mr. Moody's persuasion he joined him in his work at Chicago. After some two or three years' work in Chicago, they sailed for England on June 7, 1872, and held their first meeting at York a short time afterwards, only eight persons being present. Their subsequent work in Great Britain and America is well known. Mr. Sankey's special duty was the singing of sacred songs and solos at religious gatherings, a practice which was in use in America for some time before he adopted it. His volume of Sacred Songs and Solos is a compilation from various sources, mainly American and mostly in use before. Although known as Sankey and Moody’s Songs, only one song, "Home at last, thy labour done" is by Mr. Sankey, and not one is by Mr. Moody. Mr. Sankey supplied several of the melodies. The English edition of the Sacred Songs & Solos has had an enormous sale; and the work as a whole is very popular for Home Mission services. The Songs have been translated into several languages. --John Julian, Dictionary of Hymnology (1907) Pseudonymns: Harry S. Low­er Rian A. Dykes ==================== Sankey, I. D., p. 994, i. During the past fifteen years Mr. Sankey's Sacred Songs and Solos have had a very large sale, which has justified him in increasing the number of songs and hymns, including " New Hymns and Solos," to 1200. In 1906 he published My Life and Sacred Songs (London : Morgan & Scott). In addition to the "Story of his Own Life," the work contains an account of the most popular of his solos, with interesting reminiscences of the spiritual awakening of many who were influenced through his singing of them in public. In this respect it corresponds in some measure with G. J. Stevenson's Methodist Hymn Book, &c, 1883 (p. 1094, i.). It is an addition to the Sacred Songs and Solos, which will be held in esteem by many. In addition to his hymn, noted on p. 994, ii., Mr. Sankey gives details of the following:— 1. Out of the shadow-land into the sunshine. [Heaven Anticipated.] Mr. Sankey's account of this hymn is:— "I wrote this hymn specially for the memorial service held for Mr. Moody in Carnegie Hall, where 1 also sang it as a solo. It is the last sacred song of which I wrote both the words and music. The idea was suggested by Mr. Moody's last words, 'Earth recedes; heaven opens before me . . . God is calling me, and I must go.' On account of its peculiar association with my fellow-labourer in the Gospel for so many years, the words are here given in full." The hymn follows on p. 185, in 3 stanzas of 4 lines and a chorus. 2. Rejoice! Rejoice! our King is coming, [Advent.] Mr. Sankey writes concerning this hymn:— "During one of my trips to Great Britain on the SS. City of Rome a storm raged on the sea. The wind was howling through the rigging, and waves like mountains of foam were breaking over the bow of the vessel. A great fear had fallen upon the passengers. When the storm was at its worst, we all thought we might soon go to the bottom of the sea. The conviction came to me that the Lord would be with us iu the trying hour, and sitting down in the reading room, I composed this hymn. Before reaching England the tune had formed itself in my mind, and on arriving in London I wrote it out, and had it published in Sacred Songs and Solos, where it is No. 524 in the edition. of 1888. From Mr. Sankey's autobiographical sketch we gather that he was born at Edinburgh, in Western Pennsylvania, Aug. 28, 1840, joined Mr. Moody in 1871, and visited England for the first time in 1873. The original of the Sacred Songs, &c, of 23 pieces only, was offered as a gift to the London publishers of P. Phillips's Hallowed Song, and declined by them. It was subsequently accepted by Mr. K. O. Morgan, of Morgan & Scott, and is now a volume of 1200 hymns. From a return kindly sent us by Messrs. Morgan & Scott, we find that the various issues of the Sacred Songs and Solos were:— In 1873, 24 pp.; 1874, 72 pp. ; 1876, 153 hymns; 1877, 271 hymns; 1881, 441 hymns; 1888, 750 hymns; 1903, 1200 hymns. In addition, The Christian Choir, which is generally associated with the Sacred Songs and Solos, was issued in 1884 with 75 hymns, and in 1896 with 281. The New Hymns & Solos, by the same firm, were published in 1888. --John Julian, Dictionary of Hymnology, New Supplement (1907)
Ira David Sankey
Export as CSV