The heav'ns declare Thy glory, Lord

Thy presence, Lord, hath me supplied

Sun of my Soul, Thou Saviour dear

My God,Now I From Sleep Awake

Author: Thomas Ken, 1637-1711 Hymnal: The Cyber Hymnal #12075 Meter: 8.8.8.8 First Line: My God, I now from sleep awake Lyrics: 1 My God, I now from sleep awake, The sole possession of me take; From midnight terrors me secure, And guard my heart from thoughts impure. 2 Blest angels, while we silent lie, Your hallelujahs sing on high; You joyful hymn the ever-blest, Before the throne, and never rest. 3 I with your choir celestial join, In offering up a hymn divine; With you in Heav’n I hope to dwell, And bid the night and world farewell. 4 My soul, when I shake off this dust, Lord, in Thy arms I will entrust; O make me Thy peculiar care, Some mansion for my soul prepare. 5 Give me a place at Thy saints’ feet, Or some fall’n angel’s vacant seat; I’ll strive to sing as loud as they, Who sit above in brighter day. 6 O may I always ready stand, With my lamp burning in my hand; May I in sight of Heav’n rejoice, Whene’er I hear the Bridegroom’s voice. 7 All praise to Thee, in light arrayed, Who light Thy dwelling place hast made: A boundless ocean of bright beams From Thy all glorious Godhead streams. 8 Blest Jesus, Thou on Heav’n intent, Whole nights hast in devotion spent; But I, frail creature, soon am tired, And all my zeal is soon expired. 9 Shine on me, Lord, new life impart, Fresh ardors kindle in my heart; One ray of Thy all quickening light Dispels the sloth and clouds of night. 10 Lord, lest the tempter me surprise, Watch over Thine own sacrifice; All loose, all idle thoughts cast out, And make my very dreams devout. 11 Praise God, from all blessings flow, Praise Him all creatures here below; Praise Him above, ye heav’nly host, Praise Father, Son, and Holy Ghost. Languages: English Tune Title: BOWEN
My God,Now I From Sleep Awake

With One Consent, Let All the Earth

Hymnal: The Cyber Hymnal #7531 Meter: 8.8.8.8 Lyrics: 1. With one consent, let all the earth To God their cheerful voices raise; Glad homage pay with awful mirth, And sing before Him songs of praise. 2. Convinced that He is God alone, From Whom both we and all proceed; We, whom He chooses for His own, The flock that He vouchsafes to feed. 3. O enter, then, His temple gate, Thence to His courts devoutly press, And still your grateful hymns repeat, And still His name with praises bless. 4. For He’s the Lord, supremely good; His mercy is forever sure; His truth, which always firmly stood, To endless ages shall endure. Languages: English Tune Title: BOWEN
With One Consent, Let All the Earth

Sun of My Soul 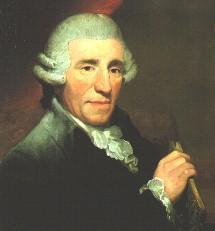 1732 - 1809 Person Name: Haydn Composer of "BOWEN" in Gloria Deo Franz Joseph Haydn (b. Rohrau, Austria, 1732; d. Vienna, Austria, 1809) Haydn's life was relatively uneventful, but his artistic legacy was truly astounding. He began his musical career as a choirboy in St. Stephen's Cathedral, Vienna, spent some years in that city making a precarious living as a music teacher and composer, and then served as music director for the Esterhazy family from 1761 to 1790. Haydn became a most productive and widely respected composer of symphonies, chamber music, and piano sonatas. In his retirement years he took two extended tours to England, which resulted in his "London" symphonies and (because of G. F. Handel's influence) in oratorios. Haydn's church music includes six great Masses and a few original hymn tunes. Hymnal editors have also arranged hymn tunes from various themes in Haydn's music. Bert Polman
Joseph Haydn

1802 - 1882 Person Name: J. Turle Adapter of "OTTERBOURNE" in Redemption Songs TURLE, JAMES (1802–1882), organist and composer, son of James Turle, an amateur 'cello-player, was born at Taunton, Somerset, on 5 March 1802. From July 1810 to December 1813 he was a chorister at Wells Cathedral under Dodd Perkins, the organist. At the age of eleven he came to London, and was articled to John Jeremiah Goss, but he was largely self-taught. He had an excellent voice and frequently sang in public. John Goss [q. v.], his master's nephew, was his fellow student, and thus the future organists of St. Paul's Cathedral and Westminster Abbey were pupils together. Turle was organist of Christ Church, Surrey (Blackfriars Road), 1819–1829, and of St. James's, Bermondsey, 1829–31. His connection with Westminster Abbey began in 1817, when he was only fifteen. He was at first pupil of and assistant to G. E. Williams, and subsequently deputy to Thomas Greatorex [q. v.], Williams's successor as organist of the abbey. On the death of Greatorex on 18 July 1831, Turle was appointed organist and master of the choristers, an office which he held for a period of fifty-one years. Turle played at several of the great musical festivals, e.g. Birmingham and Norwich, under Mendelssohn and Spohr, but all his interests were centred in Westminster Abbey. His playing at the Handel festival in 1834 attracted special attention. At his own request the dean and chapter relieved him of the active duties of his post on 26 Sept. 1875, when his service in D was sung, and Dr. (now Professor Sir John Frederick) Bridge, the present organist, became permanent deputy-organist. Turle continued to hold the titular appointment till his death, which took place at his house in the Cloisters on 28 June 1882. The dean offered a burial-place within the precincts of the abbey, but he was interred by his own express wish beside his wife in Norwood cemetery. A memorial window, in which are portraits of Turle and his wife, was placed in the north aisle of the abbey by one of his sons, and a memorial tablet has been affixed to the wall of the west cloister. Turle married, in 1823, Mary, daughter of Andrew Honey, of the exchequer office. She died in 1869, leaving nine children. Henry Frederic Turle [q. v.] was his fourth son. His younger brother Robert was for many years organist of Armagh Cathedral. Turle was an able organist of the old school, which treated the organ as essentially a legato instrument. He favoured full ‘rolling’ chords, which had a remarkable effect on the vast reverberating space of the abbey. He had a large hand, and his ‘peculiar grip’ of the instrument was a noticeable feature of his playing. His accompaniments were largely traditional of all that was best in his distinguished predecessors, and he greatly excelled in his extemporaneous introductions to the anthems. Like Goss, he possessed great facility in reading from a ‘figured bass.’ Of the many choristers who passed through his hands, one of the most distinguished is Mr. Edward Lloyd, the eminent tenor singer. His compositions include services, anthems, chants, and hymn-tunes. Several glees remain in manuscript. In conjunction with Professor Edward Taylor [q. v.] he edited ‘The People's Music Book’ (1844), and ‘Psalms and Hymns’ (S. P. C. K. 1862). His hymn-tunes were collected by his daughter, Miss S. A. Turle, and published in one volume (1885). One of these, ‘Westminster,’ formerly named ‘Birmingham,’ has become widely known, and is very characteristic of its composer. --en.wikisource.org/
James Turle

Editors: Charles Wesley Description: The SmallChurchMusic site was launched in 2006, growing out of the requests from those struggling to provide suitable music for their services and meetings. Rev. Clyde McLennan was ordained in mid 1960’s and was a pastor in many small Australian country areas, and therefore was acutely aware of this music problem. Having also been trained as a Pipe Organist, recordings on site (which are a subset of the smallchurchmusic.com site) are all actually played by Clyde, and also include piano and piano with organ versions. All recordings are in MP3 format. Churches all around the world use the recordings, with downloads averaging over 60,000 per month. The recordings normally have an introduction, several verses and a slowdown on the last verse. Users are encouraged to use software: Audacity (http://www.audacityteam.org) or Song Surgeon (http://songsurgeon.com) (see http://scm-audacity.weebly.com for more information) to adjust the MP3 number of verses, tempo and pitch to suit their local needs. Copyright notice: Rev. Clyde McLennan, performer in this collection, has assigned his performer rights in this collection to Hymnary.org. Non-commercial use of these recordings is permitted. For permission to use them for any other purposes, please contact manager@hymnary.org. Home/Music(smallchurchmusic.com) List SongsAlphabetically List Songsby Meter List Songs byTune Name About
Small Church Music