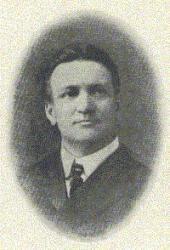 1865 - 1936 Author of "¡Paz, paz, dulce paz" in El Himnario para el uso de las Iglesias Evangelicas de Habla Espanola en Todo el Mundo Pseudonyms: W. Ferris Britcher, Irene Durfee; C. Ferris Holden, P. H. Rob­lin (a an­a­gram of his name) ================ Peter Philip Bilhorn was born, in Mendota, IL. His father died in the Civil War 3 months before he was born. His early life was not easy. At age 8, he had to leave school to help support the family. At age 15, living in Chicago, he had a great singing voice and sang in German beer gardens there. At this time, he and his brother also formed the Eureka Wagon & Carriage Works in Chicago, IL. At 18 Peter became involved in gospel music, studying under George F. Root and George C. Stebbins. He traveled to the Dakotas and spent some time sharing the gospel with cowboys there. He traveled extensively with D. L. Moody, and was Billy Sunday's song leader on evangelistic endeavors. His evangelistic work took him into all the states of the Union, Great Britain, and other foreign countries. In London he conducted a 4000 voice choir in the Crystal Palace, and Queen Victoria invited him to sing in Buckinghm Palace. He wrote some 2000 gospel songs in his lifetime. He also invented a folding portable telescoping pump organ, weighing 16 lbs. It could be set up in about a minute. He used it at revivals in the late 19th century. He founded the Bilhorn Folding Organ Company in Chicago. IL, and his organ was so popular it was sold all over the world. He edited 10 hymnals and published 11 gospel songbooks. He died in Los Angeles, CA, in 1936. John Perry
P. P. Bilhorn

Person Name: Desconocido Author of "Dulce Paz" in Himnos de Gloria In some hymnals, the editors noted that a hymn's author is unknown to them, and so this artificial "person" entry is used to reflect that fact. Obviously, the hymns attributed to "Author Unknown" "Unknown" or "Anonymous" could have been written by many people over a span of many centuries.
Anonymous