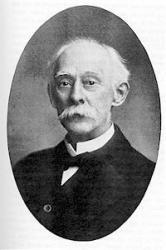 1839 - 1925 Hymnal Title: The Bright Array Composer of "[Thine, Lord, forever]" in The Bright Array Hubert Platt Main DD USA 1839-1925. Born at Ridgefield, CT, he attended singing school as a teenager. In 1854 he went to New York City and worked as an errand boy in a wallpaper house. The next year he became an errand boy in the Bristow & Morse Piano Company. He was an organist, choir leader, and compiled books of music. He also helped his father edit the “Lute Songbook” by Isaac Woodbury. In 1866 he married Olphelia Louise Degraff, and they had two sons: Lucius, and Hubert. In 1867 he filled a position at William B Bradbury’s publishing house. After Bradbury’s death in 1868 the Bigelow & Main Publishers were formed as its successor. He also worked with his father until his father’s death in 1873. Contributors to their efforts were Fanny Crosby, Ira Sankey, Wilbur Crafts, and others. In addition to publishing, Main wrote 1000+ pieces of music, including part song, singing school songs, Sunday school music, hymns, anthems, etc. He also arranged music and collected music books. He 1891 he sold his collection of over 3500 volumes to the Newberry Library in Chicago, IL, where they were known as the Main Library. Some of his major publications include: “Book of Praise for the Sunday school” (1875), “Little pilgrim songs” (1884), “Hymns of Praise” (`1884), “Gems of song for the Sunday school” (1901), “Quartettes for men’s voices: Sacred & social selections” (1913). In 1922 Hope Publishing Company acquired Bigelow & Main. He was an editor, author, compiler, and composer, as well as publisher. He died in Newark, NJ. John Perry
Hubert P. Main