Composer of "GALILEE (Holborn)" in The Cyber Hymnal In some hymnals, the editors noted that a hymn's author is unknown to them, and so this artificial "person" entry is used to reflect that fact. Obviously, the hymns attributed to "Author Unknown" "Unknown" or "Anonymous" could have been written by many people over a span of many centuries.
Anonymous 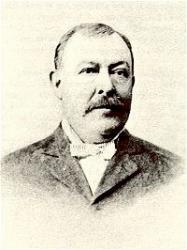 1848 - 1907 Person Name: Geo. C. Hugg Composer of "[O'er the dark wave of Galilee]" in The Helper in Sacred Song George Crawford Hugg USA 1848-1907. Born near Haddonfield, NJ, he became choirmaster at the Berlin, NJ, Presbyterian Church at age 12. At age 14 he published his first song, “Walk in the light”, which became very popular. He married Anne E Ketchum, and they had a daughter, Evangeline. He served as choirmaster of the Tabernacle Presbyterian Church in Philadelphia, and also the Broad Street and Arch Street Methodist Episcopal Churches there. He was also closely associated with the Harper Memorial Presbyterian Church there. He was a prolific composer with over 2000 works, publishing 18 books of revival and Sunday school music, and 90 songs for special occasions (Christmas, Easter, etc.). He died in Philadelphia, PA. John Perry
George C. Hugg

b. 1833 Composer of "[O'er the dark wave of Galilee]" in Gospel Echoes Robert Griffin Staples. He was born Robert Griffin on January 24, 1833 in Washington DC. Both of his parents died in a carriage accident when he was an infant; he was then adopted by his mother's sister, Mary Ann King, and her husband, Samuel Johnson Staples and he was given the name Robert Griffin Staples. He was a captain in the Union Army during the Civil War and after the war was promoted to Major. He then worked as chief clerk in the Portsmouth United States Navy Yard. Religion was an important part of his life, as well as music. He died June 20, 1891 in Portsmouth, VA. Dianne Shapiro, from Jean Brickey (great-granddaughter)
R. G. Staples

1798 - 1873 Author of "O'er the Dark Wave of Galilee" in The Cyber Hymnal Russell, William, was born in Glasgow in 1798, and educated at the University of Glasgow. Removing from Scotland to America, he was at Savannah in 1817, and subsequently at other places in the United States. He was an active promoter of education, teachers' associations, and kindred objects, and did much to further the cause of education in the States. He was originally a Baptist, but did not hold to close communion. He died at Lancaster, Massachusetts, Aug. 16, 1873. His hymn, "O'er the dark wave of Galilee" (Christ in Solitude), begins with st. iii. of a poem written by him at the request of Dr. Ware, editor of the Unitarian Christian Examiner, and printed therein in 1826. [Rev. F. M. Bird, M.A.] --John Julian, Dictionary of Hymnology (1907)
William Russell

Person Name: Russell Author of "Through His Poverty Made Rich" in A Book of Hymns for Public and Private Devotion (15th ed.)
Russell.
Export as CSV