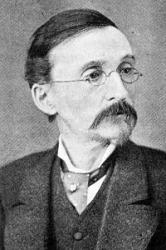 1843 - 1913 Person Name: D. Emlyn Evans Hymnal Title: Cân a Mawl Composer of "TREWEN" in Cân a Mawl Born: September 21, 1843, Penralltwen, near Castellnewydd Emlyn (Castle Emlyn), Carmarthenshire, Wales. Died: January 19, 1913, Cemmaes, Montgomeryshire. Buried: Llandyfriog (near Newcastle Emlyn), Wales. Evans was a composer, adjudicator, conductor, editor, critic, music historian and entrepreneur. Frequently irascible, especially in his last years which he spent in severe and immobilizing pain, he was one of the foremost figures in Welsh musical life in the period leading up to World War I. He was self taught, via the most popular of all Welsh music publications, John Mills’ Gramadeg Cerddoriaeth, and the two parts of Thomas Williams’ Ceinion Cerddoriaeth (Musical Gems, 1852) with its 200 hymn tunes and seventy anthems and choruses. Later, formal lessons by a music teacher, Mr. Hughes of Llechryd, a few miles from his home, gave him a firmer grounding in the old notation used until 1858. The same year, in Bridgend, he sang his first song in public, conducted his first choir and won his first prize for composition. In 1863 he moved to Cheltenham, where he worked as a shop assistant and received further lessons in piano and organ. He became a commercial traveler in 1871, and traveled in this capacity for the next 20 years the length and breadth of Wales, making contacts and observing the growth of music throughout Wales. It was probably during his overnight stays in hotels that most of his musical compositions were created at the end of his working day. Throughout this period, 66 of his pieces won prizes in competitions in Wales, England and America. Evans’s works include: Y Caniedydd Cynulleidfaol, 1895 (editor) --www.hymntime.com/tch
David Emlyn Evans