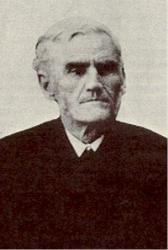 1823 - 1903 Person Name: William Orcutt Cushing, 1823-1902 Author of "Los niños salvados Serán como el sol" in Culto Cristiano Rv William Orcutt Cushing USA 1823-1903. Born at Hingham, MA, he read the Bible as a teenager and became a follower of the Orthodox Christian school of thought. At age 18 he decided to become a minister, following in his parents theology. His first pastorate was at the Christian Church, Searsburg, NY. He married Hena Proper in 1854. She was a great help to him throughout his ministry. He ministered at several NY locations over the years, including Searsburg, Auburn, Brookley, Buffalo, and Sparta. Hena died in 1870, and he returned to Searsburg, again serving as pastor there. Working diligently with the Sunday school, he was dearly beloved by young and old. Soon after, he developed a creeping paralysis that caused him to lose his voice. He retired from ministry after 27 years. He once gave all his savings ($1000) to help a blind girl receive an education. He was instrumental in the erection of the Seminary at Starkey, NY. He gave material aid to the school for the blind at Batavia. He was mindful of the suffering of others, but oblivious to his own. After retiring, he asked God to give him something to do. He discovered he had a talent for writing and kept busy doing that. He authored about 300 hymn lyrics. The last 13 years of his life he lived with Rev. and Mrs. E. E Curtis at Lisbon Center, NY, and joined with the Wesleyan Methodist Church there. He died at Searsburg, NY. John Perry ================== Cushing, William Orcutt , born at Hingham, Massachusetts, Dec. 31, 1823, is the author of the following hymns which appear in I. D. Sankey's Sacred Songs and Solos:— 1. Beautiful valley of Eden. Heaven. 2. Down in the valley with my Saviour I would go. Trusting to Jesus. 3. Fair is the morning land. Heaven. 4. I am resting so sweetly in Jesus now. Rest and Peace in Jesus. 5. I have heard of a land far away. Heaven. 6. O safe to the Rock that is higher than I. The Rock of Ages. 1. Ring the bells of heaven, there is joy today. Heavenly Joy over repenting Sinners. 8. We are watching, we are waiting. Second Advent anticipated. Mr. Cushing has also several additional hymns in some American Sunday School collections, and collections of Sacred Songs. -- John Julian, Dictionary of Hymnology ================= Cushing, W. 0., p. 274, i. Other hymns are:— 1. O I love to think of Jesus . Thinking of Jesus. 2. There is joy in heaven! there is joy to-day. Angels joy over returning Sinners. 3. When He cometh, when He cometh. Advent. --John Julian, Dictionary of Hymnology, Appendix, Part II (1907)
W. O. Cushing 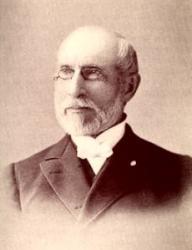