Switch back to the old search page.Advanced Search
Planning worship? Check out our sister site, PreachingandWorship.org, for 20+ additional resources related to your search.
Showing 1 - 4 of 4Results Per Page: 102050

Person Name: Anon. Author of "Go and tell Jesus, He only can forgive" in Hymns of Praise, with Tunes In some hymnals, the editors noted that a hymn's author is unknown to them, and so this artificial "person" entry is used to reflect that fact. Obviously, the hymns attributed to "Author Unknown" "Unknown" or "Anonymous" could have been written by many people over a span of many centuries.
Anonymous

1818 - 1883 Composer of "[Go and tell Jesus, weary, sin-sick soul]" in Chapel Melodies In his youth Silas Jones Vail learned the batter's trade at Danbury, Ct. While still a young man, he went to New York and took employment in the fashionable hat store of William H. Beebe. Later he established himself in business as a hatter at 118 Fulton Street, where he was for many years successful. But the conditions of trade changed, and he could not change with them. After his failure in 1869 or 1870 he devoted his entire time and attention to music. He was the writer of much popular music for use in churches and Sunday schools. Pieces of music entitled "Scatter Seeds of Kindness," "Gates Ajar," "Close to Thee," "We Shall Sleep, but not Forever," and "Nothing but Leaves" were known to all church attendants twenty years ago. Fanny Crosby, the blind authoress, wrote expressly for him many of the verses he set to music. --Vail, Henry H. (Henry Hobart). Genealogy of some of the Vail family descended from Jeremiah Vail at Salem, Mass., 1639, p. 234.
S. J. Vail 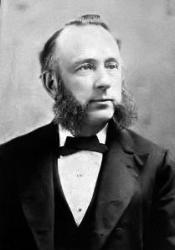 Author of "Go And Tell Jesus" in The Cyber Hymnal
Selina S. Gibbs
Export as CSV