Switch back to the old search page.Advanced Search
Planning worship? Check out our sister site, PreachingandWorship.org, for 20+ additional resources related to your search.
Showing 1 - 10 of 58Results Per Page: 102050

1923 - 1994 Scripture: Psalm 123:2 Alterer of "Wait for the Lord" in Worship and Song Jacques Berthier (b. Auxerre, Burgundy, June 27, 1923; d. June 27, 1994) A son of musical parents, Berthier studied music at the Ecole Cesar Franck in Paris. From 1961 until his death he served as organist at St. Ignace Church, Paris. Although his published works include numerous compositions for organ, voice, and instruments, Berthier is best known as the composer of service music for the Taizé community near Cluny, Burgundy. Influenced by the French liturgist and church musician Joseph Gelineau, Berthier began writing songs for equal voices in 1955 for the services of the then nascent community of twenty brothers at Taizé. As the Taizé community grew, Berthier continued to compose most of the mini-hymns, canons, and various associated instrumental arrangements, which are now universally known as the Taizé repertoire. In the past two decades this repertoire has become widely used in North American church music in both Roman Catholic and Protestant traditions. Bert Polman
Jacques Berthier

b. 1950 Scripture: Psalm 123 Composer of "[To you I have lifted up my eyes]" in Gather Comprehensive
Michel Guimont 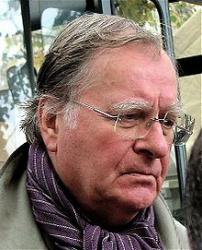 b. 1933 Person Name: Huub Oosterhuis, b. 1933 Scripture: Psalm 123 Author of "Hold Me in Life" in Gather Comprehensive Hubertus Gerardus Josephus Henricus Oosterhuis (born 1 November 1933, Amsterdam) is a controversial Dutch theologian and poet. He is mainly known for his contribution to Christian music and liturgy in the Dutch language, used in both Protestant and Roman Catholic churches, although there is much Catholic opposition to his work, which has resulted in the banning of several songs in certain dioceses. He is the author of over 60 books and at the time of over 700 hymns, songs, Psalms (often in an own interpretation), and prayers. Oosterhuis was a Jesuit and is a Roman Catholic priest. In 1954, inspired by Che Guevara who said that churches have the potential to transform the social structure of society, Oosterhuis combined his priesthood with political activism. In 1965, Oosterhuis became one of the major supporters of ecumenism, following the modernist interpretation of the Second Vatican Council. He started out to rewrite the liturgy and make it acceptable to all. Some of his changes were considered controversial within the Roman Catholic Church especially writing the prayer for agnostics: "Heer, als U bestaat, kom dan onder ons" ("Lord, if You exist, come amongst us"). His political views, the conflicts regarding the liturgy and his dismissal of celibacy led to Oosterhuis being expelled from the Jesuit order in 1969. He still however remained working as a priest, running his church in Amsterdam out of the responsibility of a bishop, at the time for about forty years. He is still focussed on writing liturgy, poetry and essays. Back in the sixties and seventies his liturgical texts were put to music by his fellow former Jesuit Bernard Huijbers (1922–2000). The co-operation between Oosterhuis and Huijbers ended. The last engaged himself more and more in a 'spirituality-without-God' or '-Thou', whereas the former kept to his biblical prayers, hymns, psalms. After they both split up and Huijbers moved to the South of France Oosterhuis' main composers were two of Huijbers' pupils, Antoine Oomen (born 1945) and Tom Löwenthal (born 1954). Oosterhuis founded the discussion center "De Rode Hoed" ("The Red Hat") in Amsterdam in 1989. The building was a former Remonstrant shelter church, hidden because Remonstrantism was outlawed in the 17th century. The building was more or less deserted at the time. Oosterhuis wanted to use it for his student organization (1990) and create a discussion center. Its nice interior made it also very suitable for TV-shows. After a short period Oosterhuis was replaced by a managing-director for a more commercial exploitation of this prominent building in Amsterdam's Canal zone. In 2002 Queen Beatrix of the Netherlands asked him to deliver the eulogy at the funeral of her Prince-Consort Claus von Amsberg, a longtime personal friend. The New Church in Delft was packed with heads of state, high dignitaries, forming an unexpected audience. That same week the Protestant VU University in Amsterdam granted Oosterhuis an honorary PhD (or Doctorate) in Theology. It was at De Rode Hoed where André van der Louw announced his Social Democratic Renewal Program which was an incentive to reform the Labour Party. Oosterhuis ultimately choose the lesser known Socialist Party as he viewed it closer to socialist ideals. He also opined that The Socialist Party is closer to the social ethics of the Bible than many Christian parties." In 2006 elections Oosterhuis stood as final candidate, a symbolic position, for the Socialist Party. Oosterhuis translated the Torah together with Alex van Heusden, which was released in five separate books, as an attempt to translate the first five books of the Bible as close to contemporary Dutch as possible without losing the style figures of the original Hebrew text. Huub Oosterhuis is the father of the musicians Trijntje Oosterhuis and Tjeerd Oosterhuis. Only a very few books, poems, verses of Huub Oosterhuis were translated into English: Fifty Psalms, Your Word is Near, At Times I See, The Children of the Poor Man, Wake Your Power (CD) - some more. --en.wikipedia.org/wik
Huub Oosterhuis

b. 1933 Person Name: David Smith, b. 1933 Scripture: Psalm 123 Translator of "Hold Me in Life" in Gather Comprehensive
David Smith

Scripture: Psalm 123 Translator of "Hold Me in Life" in Gather Comprehensive
Forrest Ingram

Scripture: Psalm 123 Author of "Up to You I Lift My Eyes" in Psalms for All Seasons Emma Turl lives in Essex. After studying English language and literature and completing teacher-training in Oxford, she spent 12 years in Africa - first in Uganda and then in Ghana with her husband, John, initially teaching and later staying at home to look after their two growing children. She had gradually become blind at an early age and has additional disabilities. She enjoys a variety of activities including playing saxophone in a small band at her local church. Emma's interest in the psalms was awakened through singing them in traditional worship as a child, and this led to exploring ways of expressing them in present-day language. Since then she has been increasingly struck by their relevance to life and faith. Time to Celebrate, a collection of hymns and Bible lyrics, was published in 1999 with some of its items set to music by her friend Gill Berry and others by John Turl. Lyrics of hers also appeared in Praise! (2000) and Come Celebrate (2009). A selection of these (at times radically revised) is among her lyrics published on this website, and others can be found at Praise! (together with Gill Berry's music) and Hymmetry. Used by permission of Emma Turl, from www.jubilate.co.uk
Emma Turl