Nearer, my God, to thee, nearer to thee

Author: Anon. Appears in 3 hymnals Person Name: Anon. First Line: You ask me why so oft, papa Refrain First Line: But, oh! my heart is very sad
The Drunkard's Child

Nearer, my God, to thee, nearer to thee

1805 - 1848 Person Name: Sarah F. Adams Hymnal Number: d81 Author of "Nearer, my God, to thee, nearer to thee" in The Garner Adams, Sarah, nee Flower. born at Harlow, Essex, Feb. 22nd, 1805; died in London, Aug. 14, 1848, and was buried at Harlow, Aug. 21,1848. She was the younger daughter of Mr. Benjamin Flower, editor and proprietor, of The Cambridge Intelligencer; and was married, in 1834, to William B. Adams, a civil engineer. In 1841 she published Vivia Perpetua, a dramatic poem dealing with the conflict of heathenism and Christianity, in which Vivia Perpetua suffered martyrdom; and in 1845, The Flock at the Fountain; a catechism and hymns for children. As a member of the congregation of the Rev. W. J. Fox, an Unitarian minister in London, she contributed 13 hymns to the Hymns and Anthems, published by C. Fox, Lond., in 1841, for use in his chapel. Of these hymns the most widely known are— "Nearer,my God,to Thee," and "He sendeth sun, He sendeth shower." The remaining eleven, most of which have come into common use, more especially in America, are:— Creator Spirit! Thou the first. Holy Spirit. Darkness shrouded Calvary. Good Friday. Gently fall the dews of eve. Evening. Go, and watch the Autumn leaves. Autumn. O hallowed memories of the past. Memories. O human heart! thou hast a song. Praise. O I would sing a song of praise. Praise. O Love! thou makest all things even. Love. Part in Peace! is day before us? Close of Service. Sing to the Lord! for His mercies are sure. Praise. The mourners came at break of day. Easter. Mrs. Adams also contributed to Novello's musical edition of Songs for the Months, n. d. Nearly all of the above hymns are found in the Unitarian collections of Great Britain, and America. In Martineau's Hymns of Praise & Prayer, 1873, No. 389, there is a rendering by her from Fenelon: —" Living or dying, Lord, I would be Thine." It appeared in the Hymns and Anthems, 1841. -John Julian, Dictionary of Hymnology (1907)
Sarah Flower Adams 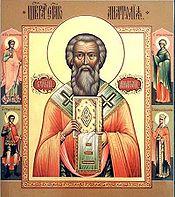 ? - 458 Person Name: Anatolius Hymnal Number: d26 Author of "Peace, it is I" in The Garner Anatolius, one of the Greek hymn-writers. No details are known of him. From the fact that he celebrates martyrs who died in the 6th and early part of the 7th century, it is certain that he is not to be identified (as by Neale) with the patriarch who succeeded Flavian in 449, and afterward procured the enactment of the famous canon of the Council of Chalcedon, which raised Constantinople to the second place among the patriarchal sees (Dict. of Ch. Biog., i. p. 110). A letter is said to exist showing that he was a pupil of Theodore of the Studium (759-826). More than a hundred hymns, all of them short ones, are found in the Mensea and Octoechus. From this account, derived from Anth. Graec. Garm. Christ, p. xli, it will be seen that his poems cannot be considered "the spring-promise" of the age of the Canons (Neale). A few of his hymns have been translated by Dr. Neale in his Hymns of the Early Church, and Dr. Littledale, in the Offices of the Hymns of the Early Church: ("Fierce was the wild billow") and ("The day is past and over"). [Rev. H. Leigh Bennet, M.A.] -- John Julian, Dictionary of Hymnology (1907)
St. Anatolius. of Constantinople

Person Name: Anon. Hymnal Number: d145 Author of "The Drunkard's Child" in The Garner In some hymnals, the editors noted that a hymn's author is unknown to them, and so this artificial "person" entry is used to reflect that fact. Obviously, the hymns attributed to "Author Unknown" "Unknown" or "Anonymous" could have been written by many people over a span of many centuries.
Anonymous