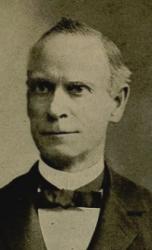 1828 - 1907 Arranged of "On to meet the foe" in Temperance Rallying Songs Asa Hull USA 1828-1907. Born in Keene, NY, he became a music publisher in New York City. He married Emma F Atherton, and they had a daughter, Harriett. He wrote many tunes and authored temperance rallying songs. He published 33 works, of which 21 were songbooks, between 1863-1895. He died in Philadelphia, PA. John Perry
Asa Hull 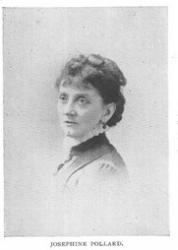 1834 - 1892 Author of "Haste to the rescue" Josephine Pollard USA 1834-1892. Born at NYC, NY, one of seven children and daughter of an architect, she attended an exclusive girls school, Spingler Institute, and was a lifelong member of the Presbyterian Church. She was a founding member of the professional women’s club, Sorosis. She never married. She became an author, poet, and hymnist, writing many children’s books and for children’s magazines, including Harper’s, Scribner’s, and the New York Ledger. She wrote 44 books, mostly religious, for children, but also about history, birds, sports and games, and adventure stories. She also wrote 100+ hymn lyrics as well. She worked as an editor for the Sunday School Times and for the Methodist Book Concern, where she edited a magazine for African Americans. Her children’s books include: “History of the U.S.” (1884); “The life of George Washington” ; “The life of Christ for young people”; “History of the New Testament in words of one syllable” (1899); “History of the Old Testament in words of one syllable” (1899); “Bible stories for children” (1899). She was in poor health in her latter years. She died at NYC, NY. John Perry =============== Pollard, Josephine, born in New York, circa 1840, is the author of (1) "I stood outside the gate" (Lent), (2) "Joy-bells ringing, Children singing" (Joy) in I. D. Sankey's Sacred Songs and Solos, 1878. --John Julian, Dictionary of Hymnology, Appendix, Part II (1907)
Josephine Pollard
Export as CSV