Switch back to the old search page.Advanced Search
Planning worship? Check out our sister site, ZeteoSearch.org, for 20+ additional resources related to your search.
Showing 341 - 350 of 434Results Per Page: 102050

Meter: 7.7.7.7.7.7 Author of "Gracious and eternal Lord, by all nations be" Lilian G. Crisp is Secretary of the Samuel Marsden Collegiate School, a day and boarding school for girls located in Karori, Wellington, New Zealand. Her "spare-time" interests are many, however. She has written many hymns and poems which have received recognition in New Zealand. She is the author of a book of children's poems entitled "Gilbert's Book"; and is about to publish another, "Christina's Book". She has written religious drama, winning on one occasion first place in the New Zealand Religious Drama Society competition, and in 1956 placing second in a similar contest. Her literary work has given her an active place in the New Zealand Women Writers Society. Miss Crisp is a very active member of the Methodist Church, and has participated in many projects in the local congregation and in the larger interests of the Church. She is a graduate of the Wellington East Girls' College. --Twelve New World Order Hymns, 1958. Used by permission.
Lilian G. Crisp 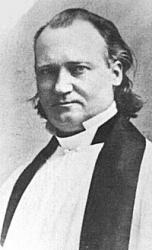