Switch back to the old search page.Advanced Search
Planning worship? Check out our sister site, ZeteoSearch.org, for 20+ additional resources related to your search.
Showing 101 - 110 of 43,703Results Per Page: 102050

Author of "Jesus, My Friend, Is Great" in Baptist Hymnal 1991
Yuji Abe

Author of "We come with grateful hearts"
C. P. Abel 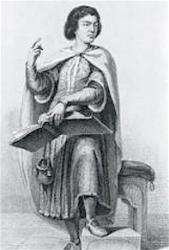 1079 - 1142 Person Name: Peter Abelard, 1079-1142 Author (attributed to) of "O what the joy and the glory must be" in The Hymnal Abelard, Peter, born at Pailais, in Brittany, 1079. Designed for the military profession, he followed those of philosophy and theology. His life was one of strange chances and changes, brought about mainly through his love for Heloise, the niece of one Fulbert, a Canon of the Cathedral of Paris, and by his rationalistic views. Although a priest, he married Heloise privately. He was condemned for heresy by the Council of Soissons, 1121, and again by that of Sens, 1140; died at St. Marcel, near Chalons-sur-Saoae, April 21, 1142. For a long time, although his poetry had been referred to both by himself and by Heloise, little of any moment was known except the Advent hymn, Mittit ad Virginem, (q.v.). In 1838 Greith published in his Spicihgium Vaticanum, pp. 123-131, six poems which had been discovered in the Vatican. Later on, ninety-seven hymns were found in the Royal Library at Brussels, and pub. in the complete edition of Abelard's works, by Cousin, Petri Abelardi Opp., Paris, 1849. In that work is one of his best-known hymns, Tuba Domini, Paule, maxima (q.v.). Trench in his Sacra Latina Poetry, 1864, gives his Ornarunt terram germina (one of a series of poems on the successive days' work of the Creation), from Du Meril's Poesies Popul. Lat. du Moyen Age, 1847, p. 444. -John Julian, Dictionary of Hymnology (1907)
Peter Abelard

Editor of "" in The Milton Hymnal
Howard Abell