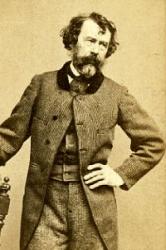 Willis, Nathaniel Parker, was born at Portland, Maine, Jan. 20, 1807, and educated at Yale College, graduating in 1826. After writing for a time for the American Monthly Magazine, which he established, and theNew York Mirror, into which the former was merged, he was attached to the American Legation at the French Court. His stay in Europe extended from 1831 to 1837. On his return he became in 1839 one of the editors of The Corsair. His works are numerous, and include Sacred Poems, 1843. He died Jan. 29, 1867. His sister, Mrs. Parton, is the well-known "Fanny Fern." His hymn —"The perfect world by Adam trod" (Dedication of a Place of Worship), was "Written to be sung at the Consecration of Hanover Street [Unitarian] Church, Boston," in 1826, and since then has been widely used, although of no exceeding merit. [Rev F. M. Bird, M.A.]