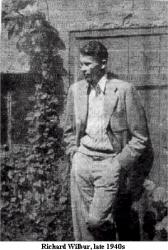 Richard Wilbur was born in New York City on March 1, 1921. He graduated with a B.A. from Amherst, where he was editor of the college newspaper, in 1942. Youthful engagements with leftist causes caught the attention of federal investigators when he was in training as a U.S. Army cryptographer, and he was demoted to a front-line infantry position where he saw action in the field in Italy, France and Germany. (When the cryptographer in Wilbur’s unit was killed, Wilbur also took over that function.) After demobilization, he continued his studies at Harvard where he obtained an M.A. in 1947, the year his first book was published. He was a member of the prestigious Harvard Fellows and taught there until 1954, when he moved to Wellesley and then to Wesleyan University. At Wesleyan he was instrumental in the founding of the acclaimed Wesleyan University Press poetry series that, from 1959 onward, featured new work by such important young poets as Robert Bly, James Wright, James Dickey, and Richard Howard, as well as such already-established writers as Louis Simpson and Barbara Howes. From Wesleyan he went to Smith as writer-in-residence. In 1987 he was named the second Poet Laureate of the U.S., following Robert Penn Warren.

In the postwar years, when poets born between 1920 and 1935 often underwent dramatic changes in their writing styles, Wilbur remained someone who mastered a style early and continued to work within it. It is a style in a direct line of descent from Wallace Stevens: unabashedly rich in its diction, urbane in its metrical sophistication, and remarkably light-hearted and playful. His first and second books, The Beautiful Changes (1947) and Ceremony (1950), were influential volumes, and Wilbur was widely regarded in the 1950s as a poet no less important than Robert Lowell. His third collection, Things of This World (1956), was awarded the Pulitzer Prize. Advice to a Prophet (1961) was followed by Walking to Sleep (1969), which was charlee.jpg (42846 bytes)awarded the Bollingen Prize. The Mind-Reader was published in 1976, and a New and Collected Poems in 1987 (with twenty-four new poems).

"The typical ghastly poem of the fifties was a Wilbur poem not written by Wilbur," wrote Donald Hall in 1961, "a poem with tired wit and obvious comparisons and nothing to keep the mind or the ear occupied." Hall added presciently: "It wasn’t Wilbur’s fault, though I expect he will be asked to suffer for it." Wilbur’s poetry has not, as Hall predicted, retained the high value it had accrued in the postwar years. Although his fame as a translator has continued to grow – his blank verse rhymed-couplet versions of several plays by Moliere have received wide praise – his poetry is often cited as an example of the formalism and the apolitical timidity that is associated with the 1950s. "Wilbur is still admired," Robert von Hallberg notes in his contribution to the Cambridge History of American Literature (1996), "but really as the best poet of the 1950s." Even though he is an outstanding example, he excels in a debased category. Among minor poets he is allowed to be most major, but among major poets he is not even considered the most minor.

A Wilbur poem reads so easily that it can dispel close scrutiny, as if the poem just as it is says all that needs to be said and withholds nothing. (As a result, Wilbur’s work has rarely attracted the attention of the skillful critic.) In fact, the smooth surface of the Wilbur poem can successfully distract us from recognizing how unusual and unexpected are the twists and leaps that structure the poem’s narrative. Many poems by Wilbur, while striking a superficial "balance," implicitly celebrate, while demonstrating, the virtues of a wit that is elaborately playful.

Richard Purdy Wilbur (March 1, 1921 – October 14, 2017) was an American poet and literary translator. One of the foremost poets of his generation, Wilbur's work, composed primarily in traditional forms, was marked by its wit, charm, and gentlemanly elegance. He was appointed the second Poet Laureate Consultant in Poetry to the Library of Congress in 1987 and received the Pulitzer Prize for Poetry twice, in 1957 and 1989.
Wikipedia Biography
TextsTunesHymnals