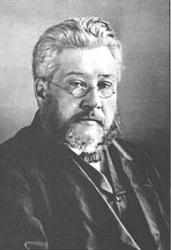 Spurgeon, Charles Haddon, the world-famous preacher, was born June 19, 1834, at Kelvedon, in Essex, where his father was Congregational minister. He was educated at Colchester, and at an Agricultural College at Maidstone, after which he was for a few years usher in schools at Newmarket and Cambridge. In 1851 he became minister of a small Baptist church at Waterbeach, near Cambridge, and soon attained great popularity. In 1854 he removed to New Park Street, London, the place where Drs. Gill and Rippon had formerly ministered, and ere long the thronging of people to hear him led, first, to the temporary occupation of Exeter Hall, and of the Surrey Music Hall, and then to the erection of the great Metropolitan Tabernacle, where he still ministers.

Mr. Spurgeon is chiefly known as a preacher and as the author of many vols. of sermons, expositions, and other homiletical literature; but he is also a hymn writer, and the compiler of a well-known hymn book. This book was prepared, in 1866, primarily for the use of the congregation at the Tabernacle. Hence its title Our Own Hymnbook, a collection of Psalms & Hymns for public, social, and private worship. It contains 220 versions of the Psalms, and 910 hymns. Of Mr. Spurgeon's contributions noted below, only one, "Sweetly the holy hymn," can be regarded as possessing any particular merit. The others do not rise above respectable mediocrity. His psalm-versions and hymns, all dated 1866, are:—
1. Amidst us our Beloved stands. Holy Communion.
2. Behold, O Lord, my days are made. Ps. xxxix.
3. Blessed is the man that feareth. Ps. cxii.
4. Here, O ye faithful, see. Holy Baptism.
5. I will exalt Thee, Lord of hosts. Ps. xxx.
6. Jesus, poorest of the poor. Ps. xli.
7. Lord, I would dwell with Thee. Ps. xv.
8. Lord, make my conversation chaste. Ps. lxviii.
9. Lord, Thy church without a pastor. Election of a Minister.
10. Make haste, O Lord, my soul to bless. Ps. lxx.
11. O God, be Thou no longer still. Ps. lxxxiii.
12. O God, Thou hast cast off Thy saints. Ps. lx.
13. Our ears have heard, O glorious God. Ps. xliv.
14. Praise the Lord with exultation, My whole heart, &c. Ps. cxi.
15. Risen Lord, Thou hast received. Election of a Minister.
16. Sweetly the holy hymn. Prayer Meetings.
17. The foes of Zion quake for fright. Ps. liii.
18. The Holy Ghost is here. Prayer.
19. The Kings of earth are in the hands. Ps. lxxxii.
20. Thy strength, 0 Lord, makes glad our King. Ps. xxi.
In addition to these Mr. Spurgeon re-wrote or added to the hymns of others, as "Come ye who bow to sovereign grace"; "Great King of Zion, now"; "O God, before whose radiant throne"; and "Woe's me that I in Mesech am"; and composed two Graces for before, and two for after Meat. [Rev. W. R. Stevenson, M.A.]