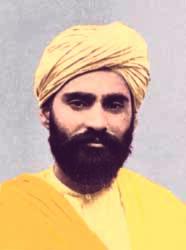 Simon Kama Marak (see Sadhu Sundar Singh) India 1889-1929. Born at Jorhat, Assam, India, the lyrics of this hymn were attributed as the last words of Nokseng, a Garo man, from a tribe of Meghalaya people then in Assam who converted to Christianity through efforts of an American Baptist missionary. It is said this person was reciting verses from the 12th chapter of John as he and his family were being killed by an Indian village chieftain, one by one.. first a child (shot with an arrow), then another, child, then the wife, then finally Nokseng, each time asked by the village chieftain to deny Jesus, but refusing to. After Nokseng was arrowed down, the chieftain, having a miraculous change of heart, is alleged to have said, “I, too, am now a follower of Jesus Christ, and the whole village accepted Jesus as Lord. An alternative tradition attributes the hymn to Simon Kama Marak, a missionary from Jorhat, Assam. Formation of these words into a hymn is attributed to the Indian missionary Sadhu Sundar Singh. The melody is also Indian, and entitled “Assam” after the region where the text originated. William Jensen Reynolds, an American hymnist in his own right, discovered the song in a collection of gospel songs published in Australia and included this song in his 1959 “Assembly songbook”. The hymn is cited as a prime example of decision theology, emphasizing the human will response rather than any action of God giving faith. Which of the above is the actual occurrence has not been determined.