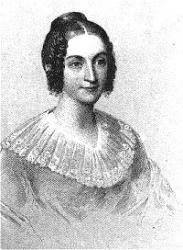 Sigourney, Lydia, née Huntley. This distinguished name stood at the head of the female poets of America a generation ago, and is still well remembered. Born in Norwich, Connecticut, in 1791, she conducted a school in the same town from 1809 to 1814, when she removed to Hartford, where she was married to Charles Sigourney in 1819. Most of her subsequent life was spent at Hartford, and she died there, June 10, 1865. Her first publication was Moral Pieces in Prose and Verse, 1815. This was followed by 58 additional works. A thorough exploration of these, or of such of them are poetical, would be necessary to trace her hymns with accuracy. They, however, are more numerous than important. Many have been used in the older collections; some are still in use, but few are extensively and none are universally so. The principal hymnbooks in which they appeared were the Congregational Village Hymns, 1824; Kipley's Selection, 1829; and the Connecticut Psalms & Hymns, 1845; the Baptist Additional Hymns by Winchell, 1832; and Linsley and Davis's Select Hymns, 1836; and the Universalist's Hymns for Christian Devotion, by Adams & Chapin, 1846.

Her best known hymns chronologically arranged are:—
1. When adverse winds and waves arise. In Affliction. A graceful lyric, possibly inspired by Sir R. Grant's " When gathering clouds around I view."
2. Blest Comforter divine. Whitsuntide. This is one of four hymns by Mrs. Sigourney, which appeared in Nettleton's Village Hymns, 1824, under the signature of "H." It is sometimes altered to "Thou Comforter divine." Her best hymn.
3. We mourn for those who toil. Death and Burial. This poem on "Mistaken Grief" appeared in Cheever's Common Place Book, 1831
4. Choose ye His Cross to bear. Holy Baptism. This was given in Ripley's Selection, 1829-31.
5. Saviour, Thy law we love. Holy Baptism. In Winchell's Additional Hymns, 1832.
6. Onward, onward, men of heaven. Missions. This missionary hymn appeared in three different books in 1833, including the Christian Lyre Supplement, &c.
7. Labourers of Christ, arise. Home Missions. This was contributed, with nine others, by Mrs. Sigourney, to Linsley & Davis's Select Hymns, 1836. This is one of the most widely used of her hymns.
8. Pastor, thou art from us taken. Burial of a Minister. Sung at the funeral of the Rev. G. F. Davis, D.D., circa 1836.
9. Go to thy rest, my [fair] child. Death of a Child. From a Selection from her poems published in London in 1841.
10. Not for the summer hour alone. Holy Matrimony. In the same Selection as No. 9.
11. Where wilt thou put thy trust? Leaning upon God. In the Connecticut Cong. Psalms & Hymns, 1845.
12. Lord, may the spirit of this feast. Holy Communion. In the same as No. 11.
13. We praise Thee if one rescued soul. Temperance Anniversary. In Adams and Chapin's Hymns for Christian Devotion, 1846.
In addition to these hymns there are several others in the collections named above. As, however, they are not repeated in modern hymnbooks they are omitted from this list. We would add that two hymns, not noted above, "Little raindrops feed the rill" (Power of little things), and "There was a noble ark," are in common use in Great Britain; and that a selection of her pieces is given in the Lyra Sacra Americana, London, 1868. [Rev. F. M. Bird, M.A.]