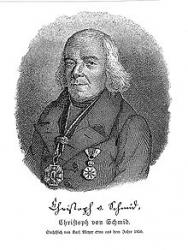 Johann Christoph von Schmidt DT Germany 1768-1854. Born at Dinkelsbuhl, Bavaria, Germany, the oldest of nine children and son of a civil servant who worked for the Teutonic Order, he received private lessons in the monastery and attended Catholic Latin school for two years, then attended the Dillingen high school, afterward tutoring for a wealthy family. He enrolled in the Episcopal University in Dillingen and studied philosphy for two years, then theology for four years. He was ordained a Roman Catholic priest in 1791. He served as parish vicar in Nassenbeuren, then chaplain at Seeg. In 1796, when he was placed as the head of a large school in Thannhausen, where he taught for many years. From 1816-1826 he was parish priest at Oberstadion in Wurttemberg. In 1826 he was appointed Canon of the Augsburg Cathedral. In 1832 he was administrator for the school system for Swabia and Neuburg. In 1837 he was raised by Bavarian King Ludwig I to personal nobility, a knight of the Order of Merit of the Bavarian Crown. In old age he received numerous honors, and his 80th birthday was a public holiday in Augsburg. The University of Prague awarded him the title of Doctor of Theology. In addition to being an educator, he was also a prolific author and writer of children’s stories. He would often read his stories to the school children after classes. His stories became very popular and were translated into 24 languages. His general theme in story writing was to awaken a practical piety in children. Wrote 40 story books for children. He also wrote poetry. His most famous work: “A basket of flowers”. He died of cholera at Augsburg, Germany. In 1857 his autobiography was published.

Christoph von Schmid (15 August 1768 Dinkelsbühl, Bavaria – 3 September 1854 Augsburg) was a writer of children's stories and an educator. His stories were very popular and translated into many languages. His best known work in the English-speaking world is The Basket of Flowers (Das Blumenkörbchen). In this work, fifteen-year-old Mary is taught all the principles of godliness through the flowers planted and cared for by her father, James, who is the king's gardener. When she is falsely accused of stealing and temporarily banished, her friends try to find some evidence in order to prove that Mary didn't do anything wrong until it's too late. In recent years, The Basket of Flowers has been published in the United States as part of the Lamplighter Family Collection.
Wikipedia Biography
TextsTunesHymnals