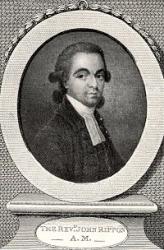 Rippon, John, D.D., was born at Tiverton, Devon, April 29, 1751, and was educated for the ministry at the Baptist College, Bristol. In 1773 he became Pastor of the Baptist church in Carter Lane, Tooley Street (afterwards removed to New Park Street), London, and over this church he continued to preside until his death, on Dec. 17, 1836. The degree of D.D. was conferred on him in 1792 by the Baptist College, Providence, Rhode Island. Dr. Rippon was one of the most popular and influential Dissenting ministers of his time. From 1790 to 1802 he issued the Baptist Annual Register, a periodical containing an account of the most important events in the history of the Baptist Denomination in Great Britain and America during that period, and very valuable now as a book of reference. But his most famous work is his Selection of hymns for public worship, which appeared in 1787. The full title of the first edition is A selection of Hymns from the best authors, intended as an Appendix to Dr. Watts's Psalms and Hymns. In 1791 he published a Selection of Psalm and Hymn Tunes from the Best Authors, adapted to Dr. Watts's Psalms and Hymns, and to his own Selection, and from that time the names of tunes were prefixed to the hymns in the successive editions of his hymn-book. In 1800 he published the 10th ed. of his Selections, containing more than sixty additional hymns.

In 1827 it was still further enlarged, and in 1844, after his death, appeared The Comprehensive Edition, commonly known as The Comprehensive Rippon, containing most of the additional hymns, with about 400 then first added, making in all upwards of 1170, in 100 metres. A rival to the Comprehensive was also afterwards published under the old title, somewhat enlarged. In the preparation of the original book, and its subsequent improvement, Dr. Rippon performed an important service to Baptist Hymnody, and also, it is said, gained for himself "an estate" through its immense sale. In the preface to the tenth edition lie claims for himself the authorship of some of the hymns, but as he refrained from affixing his name to any of the hymns it is impossible now to say with certainty which ought to be ascribed to him. There can, however, be no reasonable doubt that hymn 535, 3rd part, "The day has dawned, Jehovah comes" (q.v.), is one of his compositions. Other hymns, probably by him, are, "Amid the splendours of Thy state" (Love of God), 1800; and "There is joy in heaven, and joy on earth" (Joy over the Repenting Sinner), 1787. He also altered the texts of and made additions to several of the older hymns. Some of these altered texts are still in common use. In 1830 the additions given in the 27th ed., 1827, of Rippon's Selections were reprinted, with notes by Dr. Slater, as:—

Hymns Original and Selected; interspersed in the Twenty-seventh edition of the Selection, with Numerous Doxologies, in the Usual, the Peculiar, and in the less Common metres. By John Rippon, D.D.