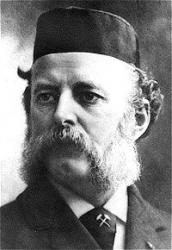 Raymond, Rossiter Worthington, PH.D., was b. in Cincinnati, Ohio, April 27,1840. He graduated at Brooklyn Polytechnic, 1858, and also studied in Germany. He served in the Civil War of 1861-4 with the grade of Captain. Since then he has practised in New York as a consulting mining engineer. He was editor of the American Journal of Mining, and is a contributor to scientific literature. He has also written stories for children, a Paraphrase of Job, and some fugitive poetry. His hymns in common use include:—
1. Far out on the desolate billow. [God everywhere.] Written for the German tune, "Ich weiss nicht was soil es bedeuten," and published in The Plymouth Hymnal, 1894.
2. Morning red, Morning red. [Easter.] Written to the tune" Morgenroth," a German battle-song, and published in the American Book of Praise.
3. Now rest, ye pilgrim host. [Reviewing the Past.] This hymn is dated 1879, and was written for the 50th anniversary oi the Brooklyn Sunday School Union. It was included in The Plymouth Hymnal, 1891, No. 509, and, after revision by the author, in Sursum Corda, 1898, and other collections.
4. 0 Thou Who art inspiring. [Submission.] Appeared in The Plymouth Hymnal, 1894, No. 635, and later in other collections.
5. The God Who spann'd the heavens above. [Courage in Conflict.] "Written for my Sunday School, to be sung to the tune of the German patriotic song, ‘Der Gott, der Eisen wachsen liess' (by Arndt, p, 79, ii.), of which my first line is an evident and intentional imitation, though the remainder is not" (Author's MS.). It was published in The Book of Praise, the Sursum Corda, 1898, and others. It is sometimes attributed to "J. Clark,” but in error.
6. There dwelt in old Judaea. In Allon's Children's Worship, 1878.
Of the above Nos. 1, 2, 5 are in W. B. Bradbury's Clarion, 1867. Dr. Raymond is a Congregationalist, and is associated with the Plymouth Church, Brooklyn. [Rev. L. F. Benson, D.D.]

Rossiter Worthington Raymond (April 27, 1840 in Cincinnati, Ohio – December 31, 1918 in Brooklyn, New York) was an American mining engineer, legal scholar and author. At his memorial, the President of Lehigh University described him as "one of the most remarkable cases of versatility that our country has ever seen—sailor, soldier, engineer, lawyer, orator, editor, novelist, story-teller, poet, biblical critic, theologian, teacher, chess-player—he was superior in each capacity. What he did, he always did well."
Wikipedia Biography
TextsTunesHymnals