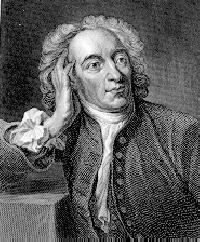 Alexander Pope was born in London, in 1688. His parents were Roman Catholics. He had a feeble constitution, was deformed in person, and attained the age of only fifty-six. He early acquired the means of independence by his literary gifts, and purchased his celebrated villa at Twickenham, whither he went to reside at the age of thirty. Of his many published works, his translation of the "Iliad" and "Odyssey" of Homer has given him the greatest reputation. As an English satirist, also, he stands very high. Nearly all his works, however, are imitations. He died at Tickenham, in 1744.
--Annotations of the Hymnal, Charles Hutchins, M.A., 1872

Pope, Alexander, the poet, son of a wholesale linen merchant in Lombard Street, London, was born in Plough Court, Lombard Street, May 21, 1688. His father being a Roman Catholic, he was first placed under the charge of Father Taverner, who taught him the rudiments of Greek and Latin. Later he attended a school at Winchester, and then at Hyde Park Corner. When about twelve he retired with his parents to Binfield, in Windsor Forest, and from thenceforth his education was mainly in his own hands. His subsequent success as a writer and poet is a matter of history, and has been dealt with in detail by Dr. Johnson in his Lives of the Poets, and by others. He died May 30, 1744, and was buried in a vault in Twickenham Church. For distinct public use, so far as we are aware, Pope wrote no hymns. His "Messiah"; his "Universal Prayer"; and his "Vital Spark" (q.v.), have been made use of for congregational purposes, but as a Roman Catholic he had no object in writing a hymn in a language which, at that time, his Church would refuse to use. In modern hymn-books his name is identified with the following pieces:--

"Concerning the Universal Prayer which concludes the Essay, it may be proper to observe that some pas¬sages in the Essay having been unjustly suspected of a tendency towards Fate and Naturalism, the author composed that Prayer as the sum of all, to show that hi a system was founded in Freewill, and terminated in Piety: that the First Cause was as well the Lord and Governor as the Creator of the Universe; and that by submission to His will (the great principle enforced throughout the Essay) was not meant the suffering ourselves to be carried along with a blind determination; but a religious acquiescence, and confidence full of hope and immortality. To give all this the greater weight and reality, the Poet chose for his model The Lord's Prayer, which of all others best deserves the title prefixed to his Paraphrase."

"I will make no apology for entertaining the reader with the following poem, which is written by a great genius, a friend of mine, in the country, who is not ashamed to employ his wit in the praise of his Maker."

Then follows the poem with the heading, “Messiah. A Sacred Eclogue, composed of several passages of Isaiah the Prophet. Written in imitation of Virgil's Pollio." It consists of 107 lines. When republished by Pope this heading was expanded into a paragraph as an "Advertisement." As a poem it is unknown to the hymn-book; but from it the following centos have passed into common use:--
(1.) As the Good Shepherd tends his fleecy care. This was given in Collyer's Collection, 1812, No. 626, in 6 st. of 4 1., and has been repeated in later hymnals, but usually in an abridged form.
(2.) From Jesse's root, behold a branch arise No. 624 in Collyer's Collection, 1812, in 5 st. of 4 1.; and again in later hymnals.
(3.) Hark! a glad voice the lonely desert cheers. No. 625 in Collyer's Collection, 1812, in 4 st. of 4 1.; in Bishop Heber's posthumous Hymns, &c, 1827, p. 106; and again in later collections.
(4.) Rise crowned with light, imperial Salem rise. In the Leeds Hymn Book, 1853, No. 687, in 3 st. of 8 1., and several later collections.
(5.) The Saviour comes! by ancient seers foretold. In Mercer's Church Psalm & Hymn Book, 1864, and others.
It may be noted that 1. 46 of The Messiah reads in the original "He wipes the tears for ever from our eyes." This was altered by Pope at the suggestion of Steele, made to Pope in a letter dated June 1, 1712, to "From every face He wipes off every tear." This latter is the poet's authorized reading, is given in his Works, and is found also in the book form reprints of the Spectator.