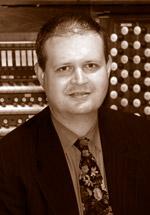 Hailed as one of today’s leading young organists by critics on both sides of the Atlantic, J. Christopher Pardini maintains an active concert schedule as a concert organist both in the United States and abroad. Serving as Organist and Director of Music at Shadyside Presbyterian Church in Pittsburgh, Pennsylvania, Mr. Pardini heads one of the nation’s leading church music programs. In this capacity he also serves as Artistic Director of Music in a Great Space, the church’s concert series.

Mr. Pardini earned the Bachelor of Music degree in Sacred Music from Westminster Choir College in Princeton, NJ where he was an organ student of Donald McDonald and Eugene Roan. He also earned the Master of Music degree in Organ Performance and Literature from the Eastman School of Music in Rochester, NY where he was a student of David Higgs. The first-place winner in the 1998 San Marino Organ Competition, in San Marino, CA, Mr. Pardini has also studied organ with Kenrick Mervine and Gavin Black, and organ improvisation with Gerre Hancock. In addition, Mr. Pardini has also studied voice with Paulo Faustini and Tracy Chebra, and choral conducting with James Jordan and Andrew Magill.

Before coming to Pittsburgh, Mr. Pardini served as Senior Organist at the Crystal Cathedral in Garden Grove, California where he presided over the 17,000 pipe Hazel Wright Organ for the Hour of Power telecast. While in California, Mr. Pardini also served on the Board of Directors of the Clarence Mader Scholarship Fund.

Mr. Pardini is also active as a composer of works for choir, organ, and orchestra. His music is published by G.I.A. in Chicago, Illinois, and Fred Bock Music Company of Los Angeles, California.