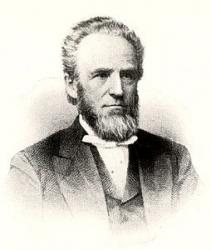 Ray Palmer (b. Little Compton, RI, 1808; d. Newark, NJ, 1887) is often considered to be one of America's best nineteenth-century hymn writers. After completing grammar school he worked in a Boston dry goods store, but a religious awakening prodded him to study for the ministry. He attended Yale College (supporting himself by teaching) and was ordained in 1835. A pastor in Congregational churches in Bath, Maine (1835-1850), and Albany, New York (1850-1865), he also served as secretary of the American Congregational Union (1865-1878). Palmer was a popular preacher and author, writing original poetry as well as translating hymns. He published several volumes of poetry and hymns, including Sabbath Hymn Book (1858), Hymns and Sacred Pieces (1865), and Hymns of My Holy Hours (1868). His complete poetical works were published in 1876.

Bert Polman
===================
Palmer, Ray, D.D., son of the Hon. Thomas Palmer, a Judge in Rhode Island, was born at Little Compton, Rhode Island, Nov. 12, 1808. His early life was spent at Boston, where he was for some time clerk in a dry-goods store. At Boston he joined the Park Street Congregational Church, then under the pastoral care of Dr. S. E. Dwight. After spending three years at Phillips Academy, Andover, he entered Yale College, New Haven, where he graduated in 1830. In 1835 he became pastor of the Central Congregational Church, Bath, Maine. During his pastorate there he visited Europe in 1847. In 1850 he was appointed to the First Congregational Church, at Albany, New York, and in 1865 Corresponding Secretary to the American Congregational Union, New York. He resigned in 1878, and retired to Newark, New Jersey. He died at Newark, Mar. 29, 1887. Dr. Palmer's published works in prose and verse include:--

Most of Dr. Palmer's hymns have passed into congregational use, and have won great acceptance. The best of them by their combination of thought, poetry, and devotion, are superior to almost all others of American origin. The first which he wrote has become the most widely known of all. It is:—

1. My faith looks up to Thee. Faith in Christ. This hymn was written by the author when fresh from College, and during an engagement in teaching in New York. This was in 1830. The author says concerning its composition, "I gave form to what I felt, by writing, with little effort, the stanzas. I recollect I wrote them with very tender emotion, and ended the last line with tears." A short time afterwards the hymn was given to Dr. Lowell Mason for use, if thought good, in a work then being compiled by him and Dr. T. Hastings. In 1831 that work was published as Spiritual Songs for Social Worship: adapted to the use of Families, &c. Words and Music arranged by Thomas Hastings, of New York, and Lowell Mason of Boston. It is No. 141 in 4 stanzas of 8 lines, entitled "Self Consecration," and accompanied with the tune by Dr. L. Mason, there given as "My faith looks up to Thee, "but subsequently known as Olivet. (Orig. text of hymn in Thring's Collection, 1882.) It has passed into most modern collections in all English-speaking countries, and has been rendered into numerous languages. That in Latin, by H. M. Macgill (p. 708, ii.), begins "Fides Te mea spectat."
2. Fount of everlasting love. Praise for renewed Spiritual Life. This also appeared in the Spiritual Songs, &c, 1831, No. 191, in 4 stanzas of 4 lines, and headed "Praise for a Revival."

"It was written in the winter of 1842-43, at a time of revival. At the previous Communion several had been received under circumstances that made Doddridge's hymn, ‘0 happy day that fixed my choice 'a most appropriate selection. Not caring to repeat it, and needing something similar, Dr. Palmer composed the present hymn." English Hymns, N. Y., 1886, p. 432.

From 1843 there comes a long break, and Dr. Palmer seems to have done no more hymn-writing until called upon by Professors Park and Phelps, of Andover, for contributions to their Sabbath Hymn-Book, 1858. His hymns written for that important collection rank amongst the best that America has produced. This is specially true of the first four (Nos. 13-16) from the Latin.
13. Jesus, Thou joy of loving hearts. (l858.) Translation of a cento from "Jesu dulcis memoria" (p. 588, ii.).
14. 0 Bread to Pilgrims given. (1858.) Translation of “O esca viatorum" (q.v.).
15. 0 Christ our King, Creator Lord. (1858.) Translation of “Rex Christe, factor omnium "
16. Come Holy Ghost, in love. (1858.) Translation of “Veni Sancte Spiritus" (q.v.)
17. Jesus, these eyes have never seen. (1858.) Christ loved, though unseen. This hymn is accounted by many as next in merit and beauty to "My faith looks up to Thee."
18. Lord, my weak thought in vain would climb. (1858.) God Unsearchable. This hymn deals with the mysteries of Predestination in a reverent and devout manner.
19. Thy Father's house! thine own bright home. (1858.) Heaven.

Ray Palmer was born at Little Compton, Rhode Island, in 1808. He studied at Phillip's Academy, Andover, Mass., and graduated at Yale College in 1830. In 1835, he was ordained pastor of a Congregational Society in Bath, Maine, from which he removed, in 1850, to the pastorate of a Congregational Society in Albany, N.Y. He has published many hymns, some of his own authorship, and some translations. He has published some sermons and reviews.
--Annotations of the Hymnal, Charles Hutchins, M.A. 1872.