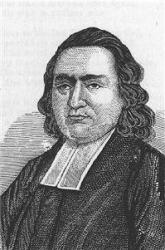 Occom, Samson (sometimes given as Ockum, and again as Occum), a Mohican Indian, was born at Norwich, Connecticut, in 1723. He was converted from Paganism under G. Whitefield, in 1739-40, and educated by the Revs. E. Wheelock and Benjamin Pomeroy. In 1748 he removed to Long Island and laboured amongst a remnant of his people. In 1759 he received Presbyterian orders, visited England, 1766-67, where he preached often (once for J. Newton at Olney), and with acceptance, and raised about ten thousand pounds for Dartmouth College, and for Indian education. His later life was spent first among his own race on Long Island, and, from 1786, in Oneida County, N.Y. He died in July, 1792. Occom's Choice Collection of Hymns and Spiritual Songs was published at New London, Connecticut, in 1774 (2nd ed. 1785). He is credited as the author of several hymns, but none of those hymns are found in his own collection. They are:—
1. Now the shades of night are gone. Morning. The date of 1770 is given to this hymn, but on insufficient authority. No evidence connects it with Occom, though it has not, on the other hand, been claimed for another. It is first found in the Hartford Congregational Collection, 1799, and was brought into general use by the Prayer-Book Collection, 1826. It is in several modern hymn-books.
2. Awaked by Sinai's awful sound. Peace with God. By this hymn, from its extensive use, Occom is chiefly known. We are satisfied, however, that in this form it is not his. It is first found in the Connecticut Evangelical Magazine, July, 1802, p. 39, "communicated as original." It is however altered from "Waked by the gospel's powerful sound," which is No. 285 in Josiah Goddard's Collection, Walpole, N. H.,1801, and possibly earlier, This older text is probably Occom's own composition.
3. When shall we three meet again? Parting. This once popular hymn has been ascribed to Occom, but the claim is doubtful. We find it in no collection earlier than Leavitt's Christian Lyre, 1830, although it is known to have been sung at an earlier date. It is sometimes given as, "When shall we all meet again?" as in H. W. Beecher's Plymouth Collection, 1855. [Rev. F. M. Bird, M.A.]