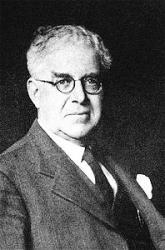 Sydney H. Nicholson, (b. St. Marylebone, London, England, 1875; d. Ashford, Kent, England, 1947) was an organist and church music educator who greatly influenced English hymnody. Educated at Oxford's New College, the Royal College of Music in London, and in Frankfurt, Germany, he became organist at several famous cathedrals, including Westminster Abbey (1919-1928). Nicholson founded and administered the School of English Church Music at Chislehurst in 1927; this important institution, with branches throughout the English-speaking world, was renamed the Royal School of Church Music in 1945. Located in Canterbury after World War II, its headquarters were moved to Addington Palace, Croydon, in 1954. Nicholson was music adviser for the 1916 Supplement of Hymns Ancient and Modern and prepared the way for its 1950 edition. He wrote Church Music: a Practical Handbook (1920) and Quires and Places Where They Sing (1932) and composed operettas, anthems, and hymn tunes. In 1938 he was knighted for his contributions to church music.

Sir Sydney Hugo Nicholson MVO (9 February 1875 – 30 May 1947) was an English choir director, organist and composer, now chiefly remembered as the founder of the Royal School of Church Music (RSCM) and the compiler of The Parish Psalter.
Wikipedia Biography
TextsTunesHymnals