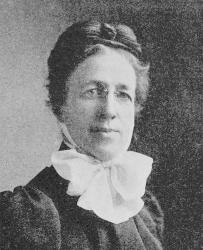 Lucy Jane Rider Meyer MD USA 1849-1922. Born at New Haven, VT, she became an author, social worker, teacher, and physician. She attended the New Hampton Literary Institution (a college prep school) and the Upham Theological Seminary. She also went to Oberlin College, graduating in 1872 with her degree in literary studies. In 1873 she entered the Women’s Medical College of PA, but withdrew after two years. She intended to become a Methodist medical missionary, but changed her mind after her then-fiance died in 1875. She did not get her medical degree until 1887, when she obtained it from the Women’s Medical College of Chicago. In 1884 she taught Bible at the Dwight L Moody Young Ladies Seminary, Northfield, MA. In 1885 she met and married a Chicago Methodist pastor and businessman, Rv Josiah Shelley Meyer (1849-1926), also Assistant Secretary for the YMCA in Chicago. He had great business acumen. She called him “Papa”.. he called her “Jennie”. They had a son, Shelly. Lucy became an educator, serving as principal of the Troy Conference Academy in Poultney, VT. After studying chemistry at M.I.T. (1877-78), she became a professor of chemistry for two years at McKendree Coillege in Lebanon, IL (1879-81). She did not wish to continue teaching chemistry. She was a good illustrator and later wrote an introductory book for children about chemistry, titled ‘The fairy land of chemistry’ (1887). From 1881-1884 she served as field secretary fror the IL State Sunday School Association and attended the 1880 World Sunday School Convention in London, England. She felt that people wanting to become religious teachers needed better training. In 1885 she and her husband opened the ‘Chicago Training School for City, Home, and Foreign Missions’. She was its first principal (1885-1917) and her husband its first superintendent. The school trained young women, offering a broad curriculum of Bible study, theology, church history, economics, sociology, and basic medical training. There was some adversity to the school by outsiders, thinking a women’s place was in the home. She is credited with reviving the office of the female deacon (or deaconess) in the U.S. Methodist Episcopal Church. In faith, she was liberal, while he was more conservative, believing the Bible should be taught literally. He did most of that teaching at the school, insisting on its interpretation as written. In 1887 Meyer began preparing some women students of her school to become deacons, with a mission of working in tenement communities. She set up the Methodist Deaconess Home and appointed her former student, Isabella Thoburn, as the first house mother and superintendent, even designing a uniform for the new women deacons. In 1888 the Methodist Episcopal Church recognized the office of deaconess. A similar school was set up in Boston, MA in 1889, with another following in Toronto, Canada in 1894. They took vacations, but she preferred a wilderness environment and he did not, so they had one wilderness vacation property and later another retreat in MI, closer to Chicago, to compromise on both travel distance and environment. She edited a periodical called ‘The message’ and later changed its name to ‘The deaconess advocate’, (1884-1914). In 1889 she published a history of the female diaconate: ‘Deaconesses: Biblical, early church, European, American’. In 1908 she founded the Methodist Deaconess Association. She and her husband resigned from the Chicago Training School in 1917, having graduated over 5000 students, but thinking they could not continue with the school as their opinions for its operation were becoming more and more divergent. They moved to CA for a year and enjoyed their retirement, she suffering from several debilitating maladies, but got much of her strength back as a result. They returned to Chicago and tried to help their school in various ways for the next couple of years. Her health eventually worsened and she died. He returned to the west coast, but never really got over losing his wife. The school later merged with the Garrett Biblical Institute in Evanston, IL. She is credited with initiating 40 institutions/homes for unfortunates. She died in Chicago. She published five works.