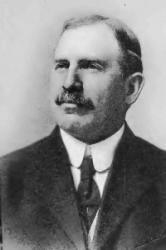 Hugh Henry McGranahan USA 1854-1931. Born at Jamestown, PA, nephew of James McGranahan, gospel hymnist, he studied music under hymnists, George Root, and Horatio Palmer, and at the New England Conservatory of Music in Boston, MA. He married Grace McKinley, and they had two sons: Joseph and James. He became an editor and author. His most widely held publications include: “The juvenile class and concert” (1882,1895), “The choral class book” (1898), “Hymn and Psalm selections compiled” (1914), “Glad praises” (1914), and “Select temperance songs, new and old” (1915). He began his career directing musical institute conventions and later had charge of church choral unions in New York, NY, and Philadelphia, PA. He also headed the music department at Moody Bible Institute in Chicago, IL, for five years. After leaving the music field for health reasons, he entered the insurance business in Pittsburgh, PA, where he directed music in the educational department of the Bellefield Presbyterian Church. In 1880 he taught music in South Shenango, PA. In 1914 he was back in Jamestown, PA, where he later died.