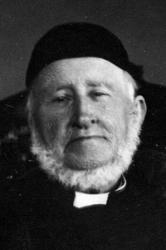 Timothy Richard Matthews MusB United Kingdom 1826-1910. Born at Colmworth, England, son of the Colmworth rector, he attended the Bedford and Gonville Schools and Caius College, Cambridge. In 1853 he became a private tutor to the family of Rev Lord Wriothesley Russell, a canon of St. George’s Chapel, Windsor Castle, where he studied under organist, George Elvey, subsequently a lifelong friend. He married Margaret Mary Thompson, and they had 11 children: Norton, Mary, George, Cecil, Evelyn, Eleanor, Anne, Arthur, Wilfred, Stephen, and John. Matthews served as Curate and Curate-in-Charge of St Mary’s Church, Nottingham (1853-1869). While there, he founded the Nottingham Working Men’s Institute. He became Rector at North Coates, Lincolnshire (1869-1907). He retired in 1907 to live with his eldest son, Norton, at Tetney vicarage. He edited the “North Coates supplemental tune book” and “Village organist”. An author, arranger, and editor, he composed morning and evening services, chants, and responses, earning a reputation for simple but effective hymn tunes, writing 100+. On a request he wrote six tunes for a children’s hymnal in one day. He composed a Christmas carol and a few songs. His sons, Norton, and Arthur, were also known as hymn tune composers. He died at Tetney, Lincolnshire, England.