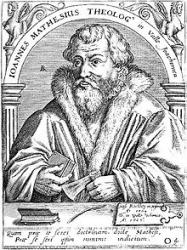 Mathesius, Johannes, son of Wolfgang Mathesius, town councillor at Rochlitz, was born at Rochlitz, June 24, 1504. He studied for a short time at the University of Ingolstadt. Thereafter he acted as family tutor at Odelzhausen, near Munich, where, in 1526, he found Luther's Von den guten Werken (Wittenberg, 1523); and then while living at Bruck (Fürstenfeld-bruck), near Munich, read two of Luther's tractates on the Holy Communion. Attracted thus to Wittenberg he matriculated there May 30, 1529, studied with great zeal and graduated M.A. in 1530. In the end of 1530 he joined the staff of the school at Altenburg, and in the spring of 1532 was appointed rector of the gymnasium at Joachimsthal in Bohemia. He resigned this post in 1540, and returned to Wittenberg to complete his studies in theology. Thereafter he was, in 1541, appointed diaconus, and, in 1545, pastor at Joachimsthal. While preaching on the Gospel for the 16th Sunday after Trinity, Oct. 7, 1565 (his subject being the "Son of the widow of Nain, and the hope of eternal life"), he was struck with paralysis, and, being carried to his house, died there some three hours later (Koch, i. 380, ii. 475; Herzog's Real-Encyklopädie, ix. 398, &c).

Mathesius was of most lovable and charitable spirit, and a model pastor, who thoroughly adapted himself to his life among a mining population. He was a distinguished preacher, his sermons ranking among the best of the period, the most famous being those in his Sarepta oder Bergpostill, Nürnberg, 1562, founded on those passages of Scripture referring to metallurgy or mining, the title being suggested by Sarepta or Zarephath. (1 Kings xvii. 9), the Hebrew name meaning smelting-place. Besides other volumes of sermons aud devotional works he also published a life of Luther (Historian von .. . Doctoris Martini Luthers Anfang, Lehr, Leben und Sterben, Nürnberg, 1566) completed just before his death, and with a preface dated Oct. 5, 1565. His hymns are few in number, and appeared scattered in his various publications. Wackernagel, iii. pp. 1150-1161, gives 21 pieces, of which 15 may be called hymns; and 15 of these pieces with a memoir by K. F. Ledderhose appeared at Halle in 1855. The finest of all his hymns, the beautiful cradle song, "Nun schlaf mein liebes Kindelein" [Wackernagel iii. p. 1152, from a Nürnberg broadsheet (not dated), c. 1560, in 15 st. of 4 1.; and in the Berlin Geistliche Lieder ed., 1863, No. 1416] does not seem to have been translated into English.

Those of Mathesius's hymns which have passed into English are:—
i. Aus meines Herzens Grunde. Morning. This has generally, though apparently without ground, been ascribed to Mathesius, and is included in the 1855 edition of his Geistliche Lieder, p. 149. But it is not found in any of his original works now extant, nor in the collected edition of his Schöne geistliche Lieder, Nürnberg, 1580; and the ascription to him has not been traced earlier than in M. Pratorius's Musae Sioniae, 1610. Wackernagel, v. pp. 177-184, gives 8 forms varing from 6 to 15 st. (some beginning "Von meines Herzens Grunde"); the oldest, in 7 st. of 8 1., being from a Gesangbüchlein published at Hamburg in 1592. He ranks it as anonymous. The text of 1592 is No. 440 in the Unverfälschter Liedersegen, 1851. The hymn was a great favourite with Gustavus Adolphus, and was often sung by his army at morning prayer. The translations from the text of 1592, are :—
1. My heart its incense burning. In full, by Dr. H. Mills, in his Horae Germanica, 1856, p. 220, repeated, abridged, in M. W. Stryker's Christian Chorals, 1885, reading "her incense."
2. My inmost heart now raises. A good translation omitting st. iv., v., by Miss Winkworth, in her Chorale Book for England, 1863, No. 164.
3. My heart with deep emotion. Omitting st. iii., v. by E. Cronenwett as No. 294 in the Ohio Lutheran Hymnal, 1880.

Johannes Mathesius (June 24, 1504 – October 7, 1565), also called Johann Mathesius or John Mathesius, was a German minister and a Lutheran reformer. He is best known for his compilation of Martin Luther's Table Talk, or notes taken of Luther's conversation and published afterwards. He rivaled Anton Lauterbach in his diligence in notetaking, and surpassed him in the discrimination with which he arranged it.
Wikipedia Biography
TextsTunesHymnals