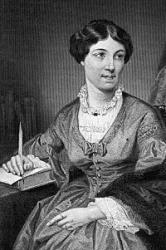 Martineau, Harriet, was born at Norwich, June 12, 1802, and died at Ambleside, June 27, 1876. Best known as the writer of Illustrations of Political Economy, Retrospect of Western Travel; two novels, Deerbrook and The Hour and the Man; Eastern Life, Past and Present; a History of the Thirty Years’ Peace, and various other works. Her first publication was a book of Devotional Exercises, with hymns appended to each Exercise, and her hymns also belong to what she speaks of in the Autobiography as her "Unitarian" period. Five of them appeared in A Collection of Hymns for Christian Worship, printed in 1831 for the congregation of Eustace Street, Dublin, and edited by her brother, the Rev. James Martineau.
1. All men are equal in their birth. Human Equality.
2. Lord Jesus! come; for here. Jesus desired. Sometimes given as(1) "Come, Jesus, come, for here"; (2) and "Thy kingdom come, for here."
3. The floods of grief have spread around. In Affliction.
4. What hope was thine, O Christ! when grace. Peace.
5. When Samuel heard, in still midnight . Samuel.
The Rev. J. R. Beard's Collection 1837, contains 1, 2, 4 and 5, and:—
6. The sun had set, the infant slept. Gethsemane. The Rev. W. J. Fox's Hymns and Anthems, 1841, contains No. 1, and
7. Beneath this starry arch. Progress . [Rev. Valentine D. Davis, B.A.]

Harriet Martineau (/ˈmɑːrtɪnˌoʊ/; 12 June 1802 – 27 June 1876) was an English social theorist often seen as the first female sociologist. She wrote from a sociological, holistic, religious and feminine angle, translated works by Auguste Comte, and rarely for a woman writer at the time, earned enough to support herself. The young Princess Victoria enjoyed her work and invited her to her 1838 coronation. Martineau advised "a focus on all [society's] aspects, including key political, religious, and social institutions". She applied thorough analysis to women's status under men. The novelist Margaret Oliphant called her "a born lecturer and politician... less distinctively affected by her sex than perhaps any other, male or female, of her generation."
Wikipedia Biography
TextsTunesHymnals