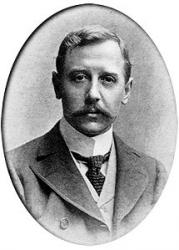 Lemare received the Goss scholarship at the British Royal Academy of Music (RAM) in 1878, and went on to became a fellow of the RAM and the Royal College of Organists. He played the organ at St. John the Evangelist’s, Brownswood Park; St. Andrew’s Church, and Public Hall, Cardiff, Wales; the Parish Church, Sheffield (1886); Holy Trinity Church, Sloane Street; and St. Margaret’s Church, Westminster. He made a recital tour of Canada and America in 1900, and also toured Europe, Australia, and New Zealand, where he helped design organs for the Auckland Town Hall. He played the organ at the Carnegie Institute in Pittsburgh, Pennsylvania (1902-15), gave recitals at the Panama-Pacific Exposition in San Francisco, California, in 1915, and was municipal organist in San Francisco (1917-21) and Portland, Maine (1921).