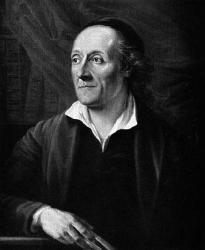 Lavater, Johann Caspar, son of Johann Heinrich Lavater, physician in Zürich, was born at Zürich, Nov. 15, 1741. He entered the Academic Gymnasium at Zürich in 1758, and in the end of 1759 began his studies in its theological department. After completing his course he was ordained in the spring of 1762, but did not undertake any regular clerical work till April 1769, when he was appointed diaconus of the Orphanage church at Zürich, where he became pastor in 1775. In July 1778 he was appointed diaconus of St. Peter's church, and in Dec. 1786 pastor there. When, during the Revolutionary period, the French laid the Swiss Cantons under contribution, and then in April 1799 deported ten of the principal citizens of Zürich, Lavater felt compelled to protest in the pulpit and in print. Consequently while on a visit to Baden, near Zürich, he was seized by French dragoons, May 14, 1799, and taken to Basel, but was allowed to return to Zürich, Aug. 16, 1799. When on Sept. 25, 1799, the French under Massena entered Zürich, Lavater was treacherously shot through the body by a French grenadier, who had just before thanked him for his charity, and from this wound he never entirely recovered. He resigned his charge in January 1800, and died at Zürich, Jan. 2, 1801. (Koch, vi. 499; Allgemeine Deutsche Biographie, xvii. 783, &c.)

Lavater was one of the most celebrated and influential literary characters of his time; a most popular and striking preacher; and a lovable, genuine, frank-hearted man, who was the object of an almost incredible veneration. His devotional writings (Aussichten in die Ewigkeit, 4 vols., Zürich,1768-78, &c), and his works on Physiognomy (Von der Physiognomik, Leipzig, 1772; Physiognomische Fragmente, 4 vols., Leipzig and Winterthur, 1775-78), were eagerly read and admired all over Europe, but were very soon forgotten. He was no theologian, and his warm heart and fertile imagination led him into many untenable positions. His works on Physiognomy are without order or philosophical principles of connection, and their permanent interest is mainly in the very numerous and often well-executed engravings. Of his poems the Schweizerlieder (Bern, 1767, 4th enlarged ed., 1775), are the utterances of a true patriot, and are the most natural and popular of his productions. His Epic poems ((1) Jesus Messias, oder die Zukunft des Herrn, N.D., Zürich, 1780, a poetical version of the Apocalypse; (2) Jesus Messias, oder die Evangelien und Apostelgeschichte in Gesängen, 4 vols., Winterthur, 1733-86. (3) Joseph von Arimathea, Hamburg, 1794) have little abiding value.
As a hymn-writer Lavater was in his day most popular. His hymns are well adapted for private or family use. Many of them are simple, fresh, and popular in style, and evangelical, earnest and devout in substance. But for church use he is too verbose, prolix, and rhetorical. Of his hymns (some 700) a considerable number survive in German collections compiled before 1850, e.g. the Berlin Geistliche Lieder, ed. 1840, has 13; the Württemberg Gesang-Buch, 1843 has 15; the Hamburg Gesang-Buch,1842, has 23,&c.
But in the more recent collections almost all have disappeared, e.g., the new hymn-book for the Kingdom of Saxony, 1883, has not a single one. The most important appeared principally in the following works:—(1) Funfzig Christlicher Lieder, Zürich, 1771. (2) Lieder zum Gebrauche des Waysenhauses zu Zürich, Zürich, 1772. (3) Christliche Lieder der Vaterländischen Jugend, besonders auf der Landschaft, gewiedmet, Zürich, 1774. (4) Zweytes Funfzig Christlicher Lieder, Zürich, 1776. (5) Christliche Lieder . . . Zweytes Hundert, Zürich, 1780. (6) Sechszig Lieder nach dem Zürcherischen Catechismus, Zürich, 1780. [Nos.1-6 in the Royal Library, Berlin, and 3-6 in the British Museum]

Besides the above a considerable number of pieces by Lavater have been translated by Miss Henrietta J. Fry, in herPastor's Legacy, 1842 (which consists entirely of translations from Lavater); in her Hymns of the Reformation, 1845; and in her Echoes of Eternity, 1859. [Rev. James Mearns, M.A.]